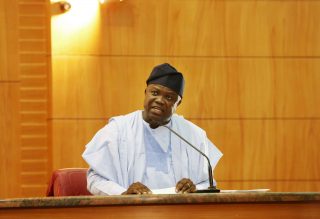 Lagos State Governor, Akinwunmi Ambode, has signed the 2018 Appropriation bill into law. The N1.4 trillion budget is the second largest in the country and the first budget of the state to cross N1 trillion. There’s a significant increase in funds apportioned to capital projects indicating a plan to consolidate on previous budget spending on infrastructure.

On Monday, the governor passed the third budget of his administration for the year ending December 31, 2018 into law. The budget will be funded with an Internally Generated Revenue (IGR) target of N897 billion and the rest from deficit financing. It comprises of N347.038 billion to be funded from the Consolidated Revenue Fund, and N699.082 billion from the Development Fund for both capital and recurrent expenditure.

Speaking on the budget, Mr Akinyemi Ashade, the Commissioner of Finance stated that the budget is tagged “Budget of Progress and Development, and in terms of capital and recurrent expenditure, we have 63 percent capital and 37 percent recurrent which shows that we are really big on infrastructural renewal.”

“In terms of revenue, we are expecting a total of N897billion both from the State and Federal receipts, so the rest would be funded through budget deficit financing,” the Commissioner further explained.

Below is the sectoral breakdown of the budget:

Economic Affairs takes the largest share and a significant boost from 2017 budget with N473,866bn, representing 45.30 percent

Governor Ambode declared while presenting on the floor of the state’s House of Assembly that the budget estimates would be used to consolidate on the achievements recorded in infrastructure, education, transportation/traffic management, security and health sectors, and also for capacity building for all public servants including teachers and health workers.

Concerning infrastructural renewal, Governor Ambode reaffirmed the commitment to sustain the tempo of continuous construction, rehabilitation, upgrading and maintenance of a network of roads across the city, including those within the boundary areas of Lagos and Ogun state.

Key projects captured in the 2018 Budget include the Agege Pen Cinema flyover; alternative routes through Oke-Ira in Eti-Osa to Epe-Lekki Expressway; the 8km Regional Road to serve as alternative route to connect Victoria Garden City (VGC) with Freedom Road in Lekki Phase I; completion of the on-going reconstruction of Oshodi International Airport Road into a 10-lane road and the BRT Lane from Oshodi to Abule-Egba.

“We are focusing this year on completing all projects that we have started knowing fully well that people would say that this is an election year, but the Governor is focused on delivering the dividends of democracy; we are not slowing down, we want to really ensure that we touch every aspect of Lagos that needs to be touched in terms of infrastructural renewal, welfare and other things that the Governor promised,” Ashade said.

In the area of job creation, the government plans to construct an ICT Focus Incubator Centre in Yaba, commence the development of Imota and Igbonla Light Industrial Park and the provision of an additional small-scale industrial estate at Shala.

Along with signing the appropriation bill, the governor also signed two significant bills into law. They are the Consolidated Transport Sector Bill and the Lagos State Teaching Service Commission Bill. The Transport Sector Law will serve to help the governor achieve his plans to create an affordable and efficient transport management system in the state while the Teaching Service Commission law will regulate and coordinate the management of teaching service matters and provide uniform guidelines for the effective management of post-primary schools in the state.