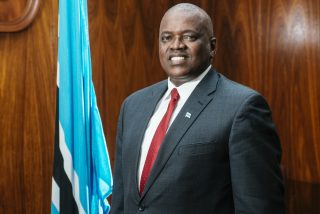 The year 2020 recorded an unprecedented slum in the demand for nonessential commodities after a travel ban was adopted globally to curb the spread of coronavirus. In light of this, President Mokgweetsi Masisi of Botswana has called for diversification of the country’s diamond-dependent economy which has experienced a massive decline due to the pandemic.

According to a report, the President stated that it is “more imperative than ever” for Botswana to diversify into other commodities such as gold and base metals, after an abysmal year for the diamond market hurt government revenue. He also added that Botswana must curb its overdependence on the precious stones seeing that the pandemic has hurt the global diamond industry. Additionally, the country will be working to develop other minerals like coal, for which it has an estimated 212 billion tonnes deposit.

At the time of its independence in 1966, Botswana was one of the world’s poorest countries.  However, a significant mineral (diamond) wealth, good governance, prudent economic management and a relatively small population of about 2 million people, have made it rank as an upper-middle-income country. Since then, the economy has enjoyed  a strong and stable growth with sizable fiscal buffers and prudent policies playing a key role as an economic firewall.

The economy has also largely escaped the ‘resource curse’ as it disconnected public expenses and revenue from the mining sector. Revenue from diamonds have been invested in public goods and infrastructure, and the government has long established universal scholarship schemes which fully subsidize education at all levels.

But despite a commendable economic track record, it is still plagued by certain challenges that directly affect its people. These include an underdeveloped agricultural sector which has caused uneven income distribution and asset ownership, poor water supply and food shortage caused by endemic declines in cereal crop production.

Going forward, the government may want to consider partnerships with private players in these key areas to solve its socioeconomic needs, reduce dependency on other countries, create more jobs and boost living standards and Gross Domestic Product (GDP).

Also, even though SMEs in Botswana employ a significant share of the working population and overall development, the market isn’t competitive enough. There is a need for the government to adopt more monetary policies that would promote the steady growth of Small and Medium Scale businesses across the country.