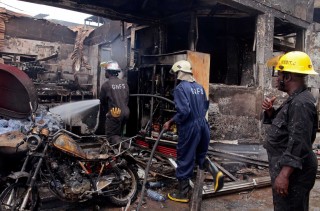 At least five people were killed and more than 20 others injured in a bomb blast on Sunday, May 24, 2020, during Eid al Fitr celebrations in Baidoa town, Southwest of Somalia.

“The initial information we have received indicates that the dead bodies of five people were collected from the scene of the blast and more than twenty others have been wounded,” police officer, Mohamed Muktar told AFP by phone from Baidoa, about 250 kilometres west of Somalia’s capital Mogadishu.

Similarly, Ismael Mukhtar Omar, the spokesperson for the Somali government, confirmed the incident to Xinhua, saying the explosion occurred where people were holding Eid al-Fitr celebrations. The blast which occurred on Sunday afternoon happened when people performed traditional dances in a field near an Internally Displaced Person (IDP) camp north of the town. As a nation, Somalia observed Eid al Fitr on Saturday but festivities continued for three days according to Islamic traditions.

While speaking with Xinhua, Hani Ibrahim, a witness stated, “As we were watching people playing traditional plays, we heard a huge blast sound, and then smoke rose up into the air.” Ibrahim went on to add, “we ran to different directions for safety, there were many casualties.” Additionally, while recounting the incident Abdi Hassan another witness said, “how can someone shed the blood of innocent civilians when they have been enjoying their Eid festival.” Hassan, however, expanded that the perpetrators have turned people’s “happiness into sadness.”

Although there was no immediate claim of responsibility for the Sunday attack, security officials suspect that al-Shabab was behind the blast.

For several years, the Islamist militant group al-Shabab an affiliate of al-Qaeda has vast control over the region in Somalia, including Baidoa. Since 2012, when its fighters were pushed out of the city, the jihadist group has remained active and attacked several military bases and other targets across the nation.

Since then, the Somali government has joined forces with the United States and other international armies to disrupt the operations of al-Shabab through missions in the form of physical combats or airstrikes. Nevertheless, authorities in Somalia need to heighten their efforts so as to eliminate any possible terrorist threat in the Horn of Africa country.