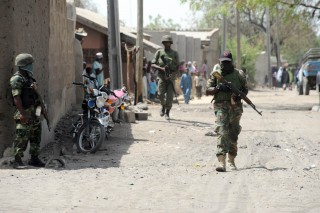 From a caliphate to a network of sleeper cells; Boko Haram’s military defeat has turned it into something worse.

A couple of months ago, the Nigerian Military—supported by troops from Chad, Niger and Cameroon—recaptured virtually every territory under the control of Boko Haram and put a final end to their Caliphate. Six weeks of sustained advances dragged the sect from controlling an area the size of Belgium in Nigeria’s northeast to looking for a place to hide. With the military successes, many in and outside the country predicted an end to an insurgency that has claimed more than five thousand lives. But the current almost-daily attacks have shown how wrong they were. It proves rather that while the Boko Haram caliphate –and any hopes of it—is dead and gone, the sect is very much alive and perhaps now has an even more threatening modus operandi.

There is no doubt that Boko Haram has been severely weakened and will never be as opulent as they were before April. Dozens of their bases have been razed, caches of their weapons seized and destroyed, and nearly a thousand people freed from their captivity. It is inconceivable that they will conquer territories again. But that is where the problem lies. The sect seems to have abandoned its aim of controlling territory, ISIS style, and has instead adopted a sleeper cell style of attacks, similar to that espoused by the forerunner of global terror—Al Qaeda.

The past few weeks have shown just how deadly these Al Qaeda-style attacks can be. Since May, the terrorists have killed around 300 persons in Nigeria mostly through hit-and-run attacks, and with no intention to hold ground. On Wednesday, the group gunned down at least 80 Muslims praying in mosques in Kukawa, a remote town 180km northeast of Maiduguri, the biggest city in northeast Nigeria and the birthplace of Boko Haram. Yesterday the group struck again when two suicide bombers killed 10 people in two separate but apparently coordinated attacks in Malari, southeast of Maiduguri. Other Coalition partners have also been hit by Boko Haram’s network style attacks. In June the group struck Niger and Chad in the same week, killing close to 80 people. In none of all their post-caliphate-destruction attacks did they try to hold ground; they are often already ‘gone’ by the time security forces arrive.

Boko Haram’s shadow tactics has made them harder to defend against and more difficult to defeat. The large and very loose nature of the northeast and its borders with Chad, Niger and Cameroon, as well as the limitations of the Nigerian—and coalition—security forces to effectively police the area plays perfectly into the group’s current script. This means the coalition forces now need a new effective counter script.

Nigeria’s transfer of the Command and Control centre to Maiduguri will make a helpful feature of the counter script, as will the strengthening of intelligence gathering, military empowerment and regional coordination. Most importantly however, there needs to be a change of perception of Boko Haram, from a sect seeking to establish a muslim caliphate by establishing territory to a group espousing regional Jihad through sleeper cells. The latter is more real and more deadly, and defeating it will need triple the effort it took to dismantle the former.