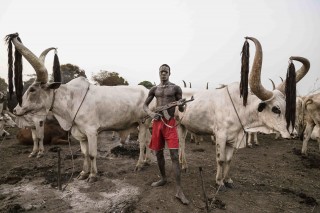 How Boko Haram makes its cash from stolen cattle

When Boko Haram stormed the Cameroonian border town of Fotokol in January 2016, it looked like it was yet another episode of killings, petrol bombing, and abductions, but the jihadists had a different strategy in mind.

Armed with machetes and machine guns, the militants shot at every man they saw, and instead of setting fire around compounds like they’ve often done in previous assaults, they gathered cows and goats and fled.

“Nowadays they attack like armed robbers,” said Mbia, who fled Fotokol to Mamfe in southwestern Cameroon. “All they want is your goat, cow, and sheep.”

Reports of stealing of livestock by Boko Haram fighters in Cameroon have been on the increase since the start of last year. In one attack early January 2016, the militants reportedly invaded a town in far north Cameroon and took wheelbarrows, bicycles, and 150 small animals such as sheep and goats, and in the process, kidnapped six people to help lead the animals back into Nigeria.

“They (Boko Haram militants) have just one destination which is the cattle market in Maiduguri (the biggest city in northeastern Nigeria),” a security official said. “They have their own traders and butchers who sell and make returns.”

The massively depleted Boko Haram sect needs money to stay afloat. As the jihadists keep losing territories to government forces, so also do their valuables go with it. Guns, cars, factories, and even cash have been surrendered to a very determined coalition military. Now, for them to survive, they have to sell what they have, or put it – what they think they have.

Boko Haram was once a buoyant group – controlling trade and fuel supply in an area in northeastern Nigeria as large as the size of Belgium. But a severe military campaign by Nigerian forces and its neighbors chased them away from virtually all the territory they once controlled and dealt a severe blow on their finances. Now, the militants see an easy way of recouping lost funds in raiding helpless villages for whatever livestock they can find and then sell them in the open market.

“They (Boko Haram) are not just attacking communities and taking away their livestock, but are also killing cattle ranchers and taking away their herds,” said Mbia, whose 30 cows were stolen by the militants in Fotokol. “Once they take your cattle, they ask you to escort the cattle into Nigeria. If you refuse, they kill you.”

It’s a long walk from Fotokol to Maiduguri, the capital of Nigeria’s northeastern Borno state, where most of the cattle are sold. Many of the ranchers who were forced by Boko Haram militants to travel hundreds of kilometers with their cattle to Nigeria never returned.

“Some left early last year (2015), and up till this moment they’ve not returned,” Mbia told me in the southern Nigeria town of Ikom, at the border with Cameroon. “We don’t know if they’re still alive or if they’ve been killed by the militants.”

“Even if you succeed [in retrieving the cows] they’ll still come back at you,” Mbia, who travels often to Nigeria to sell fabric, said. “They act as if their lives depend on the cattle.”

The jihadists have an indirect presence in the cattle market in parts of Nigeria’s northeastern Borno state, where it has carried out most of its operation since 2009. Whenever livestock is stolen in Cameroon, the militants move them across the Nigerian border into main markets in Maiduguri, also the capital of Borno. The movement is usually aided by ranchers, who are forced by the jihadists to first raid cattle from other villages, and then move them under close supervision to Nigeria.

Once in Borno, the militants move their livestock to communities close to Maiduguri, before handing them over to middlemen (most of whom are trained ranchers) who move the cattle to the open market and then sell to customers at prices far cheaper than the regular market price.

“They take out more than 50 percent of the main market price and sell at a cheap price,” Mohammed Usman, who trades in the city’s cattle market, told me in Maiduguri. “Because their cattle are far less expensive, people buy a lot from them.”

But the proceeds don’t usually return to the militants in cash. Most part of the monies made by the agents is used to buy essential things such as food and fuel for the jihadists who’ve been suffering from a shortage of these commodities after supply routes were blocked by the Nigerian military.

The middlemen also get their percentage based on their agreement with the jihadists. But those with knowledge of the trade say the militants are usually short-changed in the business.

Boko Haram militants can’t access the market themselves as chances are high that they’ll be caught by security forces once they enter Maiduguri. This situation has forced the militants to direct their cattle to the market through unscrupulous agents.

In September, the Nigerian army announced that it had arrested three men working as ranchers for the group in Azare community in the northeastern state of Yobe, as they tried to sell some stolen livestock to raise money for the jihadists.

Muhammed Bulama, his elder brother Ardo Abba Muhammed and Muhammadu Kaigama all confessed to army officials that they were responsible for keeping and taking care of all cows, sheep, and horses stolen or seized by Boko Haram.

The army said the apprehended men came to the community to sell the livestock “as they had run out of cash in their hideout” and would have used some of the proceeds from the sale to “get some food items back (to Boko Haram militants) for the upcoming Sallah festivity.”

“They were arrested riding on horseback and bicycle shepherding some sheep towards the market,” said army spokesman, Colonel Sani Usman, who also mentioned that the operation was possible “with the help of the local vigilantes in the town.”

The men had been on the radar of security agencies for a long time. Bulama, for instance, was number 105 on the photo album of most wanted terror kingpins published by the army.

But even those with the duty to fight Boko Haram, have also aided the jihadists in carrying out the cattle business.

In October 2016, 30 people were arrested by the Nigerian military for allegedly helping the militants to sell rustled cows. Among them were at least four serving soldiers, two police officers, and some members of the vigilante group, the Civilian Joint Task Force (CJTF).

A security official who did not want his name mentioned, explained that for each cow that passes into Maiduguri, unscrupulous members of the Civilian Joint Task Force (CJTF) operating in sector II (one of the group’s 10 command units in the Borno state capital) get paid 5,000 naira (about $16.5) by agents working for Boko Haram.

“The cattle have to pass through the area they operate to get to market,” the official said. “The boys made lots of money in the process.”

The amount of money made from the business was indeed huge. One of the arrested leaders of CJTF had more than 60 million naira in his bank account at the time he was arrested, the official said.

“He started to live big,” a close associate of the arrested CJTF leader said of him. “He even bought himself a Mercedes-Benz C-class.”

No doubt the cattle trade richly benefited the dubious officials and the very desperate militants.

Boko Haram is a group currently surviving on livestock sale. The jihadists are believed to have stolen thousands of livestock–by some estimate over 50,000–in northeast Nigeria and Far North Cameroon.

The influential Cattle Breeders Association in northeastern Nigeria said about 1,900 herdsmen were killed by Boko Haram terrorists in separate attacks in four years in Borno.

Chairman of the Association, Ibrahim Mafa, said that members of the association also lost about 169,000 cows; 63,000 rams; goats and sheep to the insurgency.

“We also lost about 400,000 sacks of grains and a number of our members were displaced,” Mafa told the News Agency of Nigeria (NAN) in August. “Our herdsmen have lost cows, property, and houses worth about N26 billion in 10 local government areas in Northern Borno.

In Cameroon, Boko Haram was estimated to have stolen at least 5,000 herds of cattle by early February, most of which were sold in the open market in Nigeria.

“In 2014, 1,160 cattle were stolen from our people by the Boko Haram criminal and barbaric group,” Cameroon government spokesman Issa Tchiroma Bakary said, “In 2015, the number of cattle stolen on the Cameroonian territory was about 4,200 excluding small ruminants.”

The influence of Boko Haram in the Borno state cattle market earlier on forced the government to act after security officials discovered that “most of the cattle being traded at the markets were the direct proceeds of cattle rustling perpetrated by Boko Haram insurgents.”

A statement from the Borno state governor’s office in March 2016 announced the temporary ban of “all trading activities at the Gamboru cattle markets, Dusuman, Shuwari and Ngom,” in what the government later explained was in line with its “commitment to ensure that no public place is turned to avenue for funding activities of the terrorists.”

Dried meat was also banned and a civil-military management team set up to enforce stringent conditions in slaughterhouses including a close monitoring of activities of cattle traders and butchers to stop all illegal businesses.

But all that did not completely stop Boko Haram from finding buyers for its cattle. In a country were herdsmen have the freedom to travel hundreds of kilometers to sell their cattle, the suspension only became a case of the jihadists finding an alternative place to trade.

The decision of the government then to shut down the markets expectedly affected businesses far beyond Borno. Much of Nigeria’s cattle trade passes through the northeast state and the closures reportedly caused cattle prices to rise in the south, creating lots of panic.

“It doesn’t stop them (the militants) from doing business,” one Maiduguri market trader said. “Boko Haram can take their cattle to the neighboring states and sell them while the common man suffers to find meat.”

The market was reopened in May, but the recent arrest of military officers and members of the CJTF suggests that the jihadists have not given up doing business in Maiduguri.