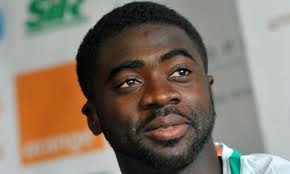 It is almost the end of the European football season and the usual merry-go-round in the transfer market has already started.

African players are not left out in this frenzy, and some players are already making moves. English Premier League side Fulham has signed Ghanaian midfielder Derek Boateng on a one year deal with an option of another extra year. The Ghanaian comes to Craven Cottage on a free transfer after spells in Greece for Panathinaikos and Getafe in Spain.

Confirming the deal on his twitter page, the 30 year old said: “I have signed a two-year deal (second year optional) with Fulham FC! I’m happy to see this deal confirmed! Thanks God, my family and everyone who support me!”

Speaking to Fulham’s official website, Boeteng expressed his delight on completing the deal. Boateng said: “I’m very happy that I have signed and I want to thank the Chairman, the Manager and the Board at Fulham Football Club. I’ve been working hard to come here and I’ll do my best for the club. It’s been a long road for but now I’m here I’m so happy and I can’t wait to start and give everything I have.”

In a related development, reports suggest Ivorian international Kolo Toure is close to joining Liverpool on a free transfer from Manchester City. The Anfield giants have seen long term defender Jamie Carragher retire last Sunday and Uruguay youngster, Sebastian Coates is rumoured to be on his way out.

Kolo Toure joined City from Arsenal in 2009 for 14 million pounds, but his contract expires next month. Toure only made 18 appearances for Manchester City in the 2012-13 season and was left out of their squad for the Champions League campaign. He was also part of the City side that won the Premier League title last year as well as “The Arsenal Invincibles” that won the 003-2004 Premier League title without losing a game.