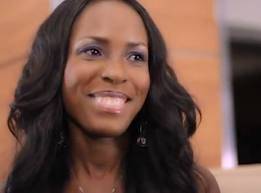 The history of blogging sounds like any other ’History of’ –  not very exciting. Yet blogs, an online platform where people share information and opinions, provide some of the most exciting reads today. Hundreds of millions of blogs about politics, business and entertainment exist on the World Wide Web, how do you choose which ones to read?

For many African readers, searching for the latest ‘gist’, gossip and celebrity news, it’s an easy choice. The Linda Ikeji blog is now a household name and undeniably one of the most profitable, exciting and often controversial, blogs in Africa. The blogger behind the medium, Linda Ikeji, is herself a fascinating woman. How she turned a once obscure practice into a money making machine and has successfully sustained it since 2006 is a testament to the commitment it takes to be an entrepreneur a creative industry. Linda shares freely today how she makes millions doing what she loves – blogging. In her characteristic casual writing style, she says “Now I don’t chase money anymore…it chases me.” Hers is a rags to riches story that emerged in the midst of controversy when radio presenter openly said she was not a role model. In response, Linda shared her story which was deeply personal with noteworthy business lessons.

Linda Ikeji, a native of Nkwerre in Imo State, Nigeria, was born in 1980 to a struggling family, the second of seven children. From as early as 10 years old, Linda was writing. The fiction she penned down were praised by her friends and family and over time she cultivated a passion for news. Unlike many teenagers her age, Linda loved watching newscasters and interviews and by the time the opportunity presented to attend university in Lagos, her course choice was decided: Mass Communication. She was admitted to study English in university to her disappointment, but she decided to make the best of it. To support herself and her family through school, Linda began working at the age of 17, doing everything from waitressing and ushering to modelling and bartending, none of which paid a lot in the late 90s. She recalls, “I’d leave lectures, go to a hotel and sell beer from 1pm till 10pm. I did this for a few months. It wasn’t easy but I had to survive”. Linda worked hard, she was determined to succeed and become a journalist, her lifelong dream. In her second year of university however, she experienced a defining moment where she made a choice that would impact the rest of her life, particularly her decisions on avenues for earning money.

Being a beautiful model with growing popularity, Linda was approached by several wealthy men looking for sexual favours in exchange for money – a common practice in many higher institutions. These men offered quick access to the easy lifestyle that was so prized among university girls yet excluded many from poor backgrounds. For an aspiring career woman and entrepreneur, the quick money held deep appeal. Yet Linda had decided early on never to give her body in exchange for money so when the temptation came, hungry, desperate Linda, battling family pressures to send money, was able to resist. Following her experience with nearly compromising her values, she renewed her commitment to hard work and living with dignity no matter the circumstances.

After university she worked hard to break into the journalism trade, launching her media company, Blackdove Communications, a modelling agency and events management outfit. She also started what she describes in her first ever blog post as her “true passion”, her magazine called, FM & B. The first issue was released in 2006 and after discovering how capital-intensive and time-consuming magazine publishing was, only two more editions made it to print. Fortunately, in that same year, Bella Naija, another popular Nigerian blog, carried a story about Linda herself and for the first time, Linda began to see a new possibility to take her writing to the world. Blogging had all the charm: it was free except for the cost of an internet connection, easy to do and gave you access to millions of readers instantly. From that first Bella Naija blog post, she was sold.

7 years later, Linda Ikeji’s blog is averaging between than fifty and one hundred thousand visits every day from various countries. In fact, the blog has become a melting pot for Nigerians based at home and in the diaspora. Speaking about how others can turn something as unconventional as blogging into a multi-million naira business, Linda said “You have to love blogging. You can’t say I want to blog because I want to make money. It takes a stepping stone to get there. There are over a thousand blogs, but what will make people enjoy visiting your blog depends on the efforts you put into it. So, be passionate about it, be consistent, don’t blog once or twice in a week, blog everyday if you can, enjoy it, and love it.” Her advice is on par with the words of many success coaches and creative giants – love what you do and you will never have to work another day in your life.

Although Linda began her business as a hobby, did it for four years before making any money and had no set goals for it at the beginning, she’s making the most of every opportunity that comes her way. Her blog generates millions of naira annually from advertisements run by companies and Linda has gradually moved into a field she calls ‘motivational writing’. Speaking about her first book It Takes You, Linda said “I hope more than anything else that everyone who reads this book learns something from it. I hope it changes their perception of some things and more than anything else I hope it inspires them to go out there and make something of themselves”.

The money she earns has not only ended her family struggles but has brought her great influence in the entertainment industry and amongst young people. To her credit, her influence has been a force for change. By mobilising thousands of readers in her online community, Linda was able to lend a voice to Blessing Effiong, a young girl who had been detained for four years in prison without a trial. Four months after the story was reported on the blog, Blessing walked out of prison with her freedom, grateful to all her supporters including Linda Ikeji.

The story of Linda Ikeji, Nigeria’s most popular blogger, shows that you can create value, and therefore a business and influence, from whatever you’re passionate about; and even when controversy abounds, there are many opportunities to do good.

Whether you agree with her tactics and content or not, we have to hand it to Linda, she has entertained, engaged, inspired and provoked Nigerians for 7 years doing what she loves best. She has turned blogging into a lucrative business and shows no sign of stopping.