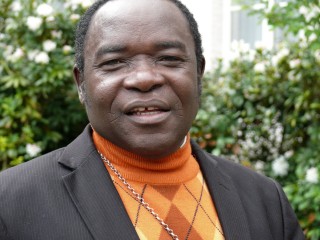 Bishop Kukah – The cook of controversy

Bishop Mathew Hassan Kukah is not your average catholic minister. He doesn’t just conduct masses and preside over catholic churches in his diocese in Sokoto, Nigeria. That is certainly not the life of one of Nigeria’s prominent clergies. Even though Father Ejike Mbaka – another catholic clergy – has had a fair share of media spotlight for speaking against former president Goodluck Jonathan’s administration, Bishop Matthew Kukah takes the cake for almost never being out of the media. “The man is always talking,” said a colleague of mine in a table discussion. “He always has something to say. Something capable of inciting people.” Her statement was as a result of the recent controversy sparked by Bishop Kukah when he said the anti-corruption probe by President Muhammadu Buhari was a distraction to good governance.

On this side of the world, people hinge their lives on the words of clergies, and worship the ground they walk on, turning some into celebrities in their own rights. Nigeria has its fair share of celebrity clergies, many of whom are Christians in the Pentecostal denomination, mostly famous for their huge followership and affluence. But for a while now, celebrity catholic clergies like Father Mbaka and Bishop Kukah have sprung up, not for their affluence, but for being very vocal about leadership and politics.

The recent debate incited by Kukah is not so much a surprise. The 63 year old is constantly in the midst of political leaders, and gracing media interviews that newspapers have enjoyed creating headlines from. In 2012, Kukah caused a stir when he said pastors who own private jets are an embarrassment. He said the acquisition of such material things diminishes the moral voice of the church in it’s fight against corruption. “Unless we distance ourselves, we cannot speak the truth to power … We should not be seen as playing the praying wing of the party in power.” Members of the Christian Association Nigeria (CAN) lashed out at Kukah, calling him a hypocrite. “If there is any clergyman in the country whose constituency is government, it is Bishop Kukah who has served every government in power in the last decade,” said Elder Sunday Oibe, a CAN official.

However, this recent controversy stirred by the clergy man seems to be the fiercest yet, many thanks to social media. Following a visit of the National Peace Committee to the speaker of the House of Representatives, Hon. Yakubu Dogara on Wednesday, journalists caught up with Kukah for a brief question and answer session, that was when he made the statement that stirred up arguments. “There is no such thing as probe in a democratic setting like ours. What obtains is investigation, and once people lead and things are not right, investigation becomes necessary … But we are saying that a lot of talks and speculation about this probe are the distraction nobody needs.”

Today, a number of Nigerians interpreted that statement as a criticism to the present administration, leaving many confused on the stance of the Bishop. What does his statement really mean? Is he for or against anti-corruption? And, is probing a part of governance or a distraction?

I’m constrained to intervene today, but why do I get the feeling that quite a number of people believe Bishop Kukah was saying ‘no probe’?

So Bishop Kukah is part of them… shey? PROBES ARE DISTRACTIONS….. Hello man, how much were u paid?

2. Bishop Kukah knows, our PMB has got pedigree 4 shouting probe, achieving nothing. He failed to recover £1 of stolen fund btw 83-85. Why?

With this out there, maybe Nigerians will wake up tomorrow with a different thought regarding the Bishop’s statement. Hearing it for the first time, they probably have not given it a proper thought. This may just have been a controversy born out of misunderstanding.