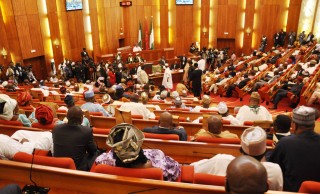 The bill to legitimise constituency projects is nothing but a way of legalising padding, stealing and corruption in exalted places

The Nigerian House of Assembly has announced it is currently observing a bill to legitimise the execution of constituency projects. According to a report first released in December 2016, the bill, if passed, will grant the house about 20 percent of the 2017 budget and other budgets around the country. Speaking at a function in Abuja, the sponsor of the bill, Senator Buhari Abdulfatai stated that the bill will see 2.5 percent of funds generated by the deferral government set aside for the execution of such projects.

The news of the bill first came into limelight in December 2016 when the senate announced plans to legitimise constituency projects in the wake of allegations of corruption and padding. The announcement drew public ire as civil groups attacked the plan, describing it as an updated means of siphoning funds. We thought the bill had died until Senator Buhari Abdulfattai expressed the fact that the little devil is still very much alive.

The issue of constituency projects has been a source of fracas since Nigeria returned to democracy in 1999. There have consistently been face offs between the two arms of governments regarding the extent of insertions made by the members of the house in form of constituency projects. The matter, however, received public awareness when the issue of padding was raised by both legislative and executive arms against each other. The resulting resolution led to the reported mass sack of State House workers who inserted lines of expenditure in the budget. But to the end, the allegation has raised no dust in the senate. The only time it drew the attention of the public was when an explanation was provided by Honorable Abdulmumin Jilbrin of the House of Representative. However, instead of treating it as a criminal offence, the normality and rationally of such insertions was underlined as the matter was subtly resolved between the arms of government, and at party level.

Constituency projects are projects outlined by senators for execution at their respective constituencies. It is believed that the legislators had outlined the needs of their respective constituencies prior to inserting such projects in the budget. Such projects are funded by the budget, and the projects are included during the process of reviewing of proposed budget submitted by the president. Once approved, the money is released by the executive to the contractors, which often is a hoax company created by the legislator who inserted the project. The fund, meant for such project, is eventually shared between parties that agreed to the insertion. Some senators get as much as 400 million per year for such projects. The process is repeated at the legislation of each budget submitted to the house.

Constituency project is nothing but a fraud. It is only a way to draw money from the national purse to private pockets as legislators who have yearly received funds for such projects can barely point to one project executed since 1999. The move by the house which has since been condemned by Nigerians is only a means to legalise padding, just like stealing, which has, unfortunately, been differentiated from corruption both by ex-president Goodluck Jonathan and the speaker of the House of Representative Yakubu Dogara.

There is also the possibility of the same project might be proposed by the executive under a different name. But such executive project will only be known as “Budget Project”, while the one nominated by a legislator would carry the name “constituency project”.

If at all there be a need for legislation of such projects, the execution should be within the powers and functions of local government chairpersons who are the closest to their grassroots. And in a saner clime, such projects would only be arrived at through a public meeting with natives of the constituency to know their most pressing need. The fact that constituency project is a hoax is underlined by the tragic level of poverty at several settlements and towns in the country. Some towns don’t even have a proper source of good water. Okeigbo, a town in Ile-Oluji/Okeigbo Local Government Area of Ondo State last had their bulbs illuminated in 2014. Igokoda, another town in Ondo state has not seen electricity in about 9 years. Each of these towns have representatives at the house which receive funds for constituency project each year without doing a thing.

The good part of the legislation is that the president will have to sign the bill into law. We might want to trust the president to ensure the bills dies a natural death when it gets to his office, even though his objection – if he only objects, not kill – can be overruled through a dubious but legal means by the senators. As long as the presidency objects to the bill, Nigerians have hope. Except that the bill be opposed, the bill will empower each senator and or member of the house of representatives to propose a constituency project each year. The overreaching effect is an overblown project which will force Nigerian into borrowing to implement. And the debt pit will become deeper, entrapping generations unborn.

This bill should not only be killed, the idea of constituency project should be erased from the national memory or at best be suspended until a proper system to supervise its execution is established