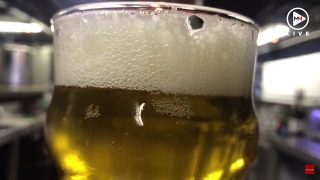 South African brewing company, Poison City Brewing is pushing its latest Durban Poison cannabis beer into the market. The Durban Poison cannabis beer is the first cannabis-based beer produced in the country since a court decision to legalize the growing of marijuana in South Africa for private consumption. The beer brand is named after a popular marijuana strain with the same name that is easily identifiable through smell and a short flowering period.

For Poison City Brewing, while breaking into the cannabis market was important, they needed to find a way to not flout the laws regarding Marijuana. Though Cannabis has been legalized to be grown for private consumption, it is still illegal to sell or distribute the psychotic drug or to display it publicly.

“The easiest route into the market was to go with beer. And an interesting part there is that in beer there’s an ingredient called hops which most people know about and hops is actually part of the same plant group as cannabis,” said Graeme Bird, Managing Director of Poison beer city brewing told Reuters.

South Africa is Africa’s biggest beer market in Africa, with 32.32 million hectolitres of beer consumed annually. Cannabis entrepreneurs in the country are hoping cannabis consumption also becomes a norm like beer. The new beer product from Poison City Brewing epitomizes the reputation cannabis is fast-gathering in South Africa since the court ruling last year. The court ruling has led to a policy shift in workplaces, and in building complexes, and has started discussions about creating an industry around cannabis.

Asides Poison City Brewing, other South African sectors, like pharmacies, are also incorporating cannabis into their products, though not enough to make people ‘high’. There are plans for mass production of marijuana for medicinal purposes, with the end purpose being to eventually remove all restrictions on its sale and distribution in South Africa.

Only two African countries have legalized cannabis – Zimbabwe, Lesotho, while countries like Morocco, which is the second largest cannabis producer in the world, Malawi, Swaziland, Nigeria, and Ghana are all on the way to legalization. For some of these countries, legalization could mean extra revenue for them. Advocates for cannabis legalization have estimated that it is a potential billion dollar industry, with more than 10,000 tons of the substance produced on the continent annually. Canada’s recently-legalized cannabis industry is worth $4 billion annually.