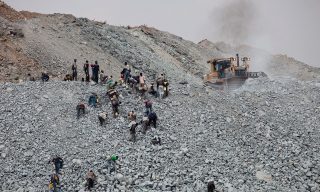 Fresh from securing a profit-sharing deal that ended a longstanding tussle with the Tanzanian government, Barrick Gold Corp is faced with a new lawsuit in the United Kingdom over alleged human rights abuses at one of its mines in the East African nation.

On Friday, a group of seven citizens filed a legal claim at the British High Court against a subsidiary of the Canadian miner in Tanzania, alleging human rights abuses by security forces at the company’s North Mara mine. The claims by members of the community living near the mine were made against Acacia Mining (now Barrick Tz Limited), which operated the mine from 2010 until 2019 when it was bought out by Barrick.

During its ten-year spell in Tanzania, Acacia faced several allegations ranging from environmental pollution, human rights violations and tax evasion that culminated in a ban on its mineral concentrate exports in 2017 and the closure of two mines. Moreover, this is the second British lawsuit against the Barrick subsidiary for deaths and injuries at North Mara – the first was filed in 2013 and lasted two years before Acacia settled.

From 2014 to 2016, 22 killings and 69 injuries were documented at or near the mine by non-profit organizations MiningWatch Canada and RAID, both of which are assisting the plaintiffs in the latest case. A 2016 Tanzanian parliamentary inquiry also received reports of 65 killed and 270 injured by police jointly responsible for security at the mine.

The British charity RAID last June wrote to Acacia about its use of the Tanzanian police in providing security at the mine. Meanwhile, Acacia itself acknowledged six deaths relating to the use of force against intruders and/or police involvement and 28 other instances of what the company termed ‘intruder fatalities’ from 2014 to 2017.

Like the first case, experts have said the recent legal battle would most likely end with a settlement that benefits both Barrick and the complainants who are represented by British law firm Hugh James. But the issue adds to the growing list of controversies miners face in Tanzania, either involving the government, charity organizations or members of communities home to mines.

But beyond settling contract disputes through domestic or international arbitration, or reaching deals that guarantee the government increased earnings from its mineral resource, the government should make legal provisions and set up mechanisms that would prevent human rights abuses at mines operated by foreign investors whose modus operandi places profits above human rights fundamentals.