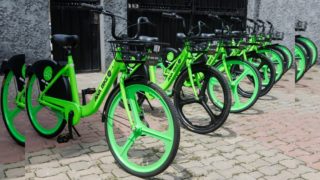 In 2001, Ojo Maduekwe, Nigeria’s transport minister at the time, ardently advocated the adoption of bicycles as an alternative means of transportation in Nigeria. He was often seen cycling through the streets of the federal capital to his office with his staff members. On one occasion, Maduekwe was drenched by a heavy downpour. On another occasion, he was hit into a ditch by a bus while cycling to the office, but these accidents did not deter his bicycle advocacy.

Maduekwe believed cycling would be a solution to issues like fuel scarcity and gridlocks in major Nigerian cities. But his advocacy was widely criticised. Critics saw his idea as obsolete and unrealistic. They argued that Nigerian roads are not safe for cycling. A valid point, but cycle tracks could have been added to road networks across the country.

In Nigeria and most of Africa, cycling is often regarded as a recreational activity. But one startup is working to change that. AWA Bike, West Africa’s first smart bike-sharing company is redefining the narrative that bicycles are more than just recreational vehicles; they promote good health, provide easy mobility, and ensure environmental sustainability.

Users rent bicycles placed in strategic locations where people have to walk long distances for a fee. To do this, users unlock the bicycles using a QR code provided on AWA App. After use, the bicycles are parked at the nearest dock station to one’s destination.

In this interview with Ventures Africa, Ifeoluwa Ogundipe, the CEO of AWA Bike discusses the company’s four-year journey, challenges, and environmental sustainability.

What influenced your decision to establish a bicycle-sharing company?

It was a major idea that came while I was doing my studies in France where I mostly used bicycles as my means of commuting. It occurred to me that in certain areas of our daily lives here in Nigeria, bicycles could also be a very useful means of transportation.

People often see cycling as a recreational activity, how do you convince them it is more than that? What has the acceptance of the brand been like?

It is not really about convincing them. I feel it is something people are beginning to realize. You are right to say people often see bicycles as a recreational activity or maybe for sport. But now, especially with increases in fuel price and the ban on okadas, bicycles have become a more necessary tool for people and more people are realizing that, especially in the metropolis.

For instance, if you go to Lekki or VI, you will see that a lot more people are using bicycles. This is something that is beginning to dawn on people. But in the areas where we particularly operate, which is university campuses, from the moment we get in, it is obvious that bicycles are products they need. We don’t have to do much convincing. We don’t even spend money on marketing, the product sells itself.

For some reason, I think the problem is that people don’t know how to find easy access to bicycles, because the moment bicycles are provided they are used. For our own business, the product has largely sold itself. We didn’t have to do much convincing.

In how many communities is AWA Bike functional presently?

As we speak, I would say we are currently active in eight communities. That number is going to be 11 or 12 in about four weeks, hopefully. And before the end of the year, we hope the number gets to15, at least.

In terms of the number of bicycles, we currently operate with a fleet of over a thousand bicycles. We are aiming for at least two thousand in the next few months.

As the first bicycle-sharing company in West Africa, what are the challenges you face in the business?

Initially, the major challenge was funding, because the business is capital intensive. Bicycles used to be a part of our culture but not anymore for some reason. It is much harder to convince Nigerian investors that there is a bicycle idea that makes sense and they should put their money on it. It isn’t very easy getting access to funding and it is still something we are on.

There are also challenges around infrastructure and security. Although some infrastructures exist, we are currently in partnership with some governments like Lagos and Ibadan Secretariat to do more. These conversations are ongoing and we are supposed to arrive at a longer-lasting relationship where there is a significant investment on behalf of the state on infrastructure.

Generally, we are concerned about building a city where the transportation system can accommodate various means of commuting, of which cycling would be a big part.

We often like to say that for every car that we can get off the road in exchange for a bicycle, we are doing our part in reducing carbon emissions to create a more sustainable environment in Nigeria and on earth. Every business must begin to pay more attention to environmental sustainability and businesses should try to be eco-friendly.

Our business is currently eco-friendly and we hope that more people pay attention to try and reduce carbon emissions and preserve the earth. It is not just about bicycles, it could also be electric bikes, just trying to move from the normal conventional combustion engine in cars to maybe electric cars. We hope that we find more startups like ours who in their own ways are trying to reduce carbon emissions.

How do you get into communities?

Initially, the burden was on us to go to communities to speak, educate them, and ask if they were willing to partner with us to make this mode of transportation a reality. Now, the business is getting bigger so it’s moved to a model where institutions now approach us for partnerships and ask us to help roll out their own bike-sharing schemes.

Typically, people could reach out through phone calls or email to state that they are interested in working with us. We then deliberate internally and decide if it is an opportunity we would like to explore. If the request is accepted, we get in touch with the contact people and probably have a series of meetings to deliberate what the structure would be, how it would work, what the infrastructural capacity is, what the areas of concern are and how we would address it. Once all these are settled, we have an operating contract and be begin.

As a tech-driven lifestyle brand, do you have plans to introduce e-bikes? What are the plans for the future?

Yes, expanding our product offering is definitely something that we are looking at right now. We are looking at other modes of transportation like micro-mobility that are also environmentally friendly. Hopefully, within a short time, we will have more products rolled out.