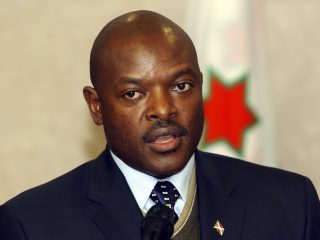 The democratic progress made by African countries since 1990 are being reversed in record time, as another country yet again amends its constitution to extend presidential term limits. The results of last week’s referendum were released on Monday, with the citizens of Burundi voting to approve a new constitution for their country.

The amendments to Burundi’s constitution include increasing presidential term limits from five to seven years, granting more constitutional powers to the president, while some parts of the constitution that were subjects of debates before, like having two vice presidents, were retained.

The new changes will allow Burundi’s President Pierre Nkurunziza contest for two more terms until 2034, having been elected Burundi’s president for a third term in 2015. The country’s electoral body said more than 96 percent of voters turned out to vote in last week’s historical constitutional referendum. 73.26 percent voted “Yes” in last week’s referendum, while 19.34 percent of voters voted “No.”

Nkurunziza became president of Burundi at the end of a bloody civil war in 2005. This constitutional amendment has been termed as a violation of the Arusha agreements of 2000, that political analysts say was key to ending the Tutsi/Hutu civil war in Burundi in 2005. The Arusha Agreement stipulates that no president shall be allowed more than two terms in office.

He emerged winner at the 2015 elections, with a voter turnout of less than 30 percent, a clear indication of what the people thought about his administration. Since then, he has embarked on a campaign of fear and terror, with arbitrary arrests on opposition members, stifling press freedom, and clamping down hard on protests.

More than 1200 people have died since 2015, and thousands more have left the country for neighboring Rwanda and Congo. His political party gave him a title “Eternal Supreme Guide” recently, an assent to the authoritarian mien he is cultivating with devoutness.

Reports say the referendum was carried out under an atmosphere of intimidation, with members of the ruling party threatening to “chase” all the ‘no’ voters “to their last hiding places,” with local officials also encouraging people to expose those who voted ‘no’ in the referendum. Human Rights Watch released a report in April documenting some of the repression carried out by people loyal to Nkurunziza.

With this referendum, Nkurunziza joins the ranks of many African presidents who have extended their stay in office by removing constitutional term limits, and have refused to step down. The presidents of Uganda, Republic of Congo, Congo D.R.C, Chad, Togo, Rwanda have all removed the cap on the number of times an incumbent can contest for president in their countries. Many of this constitutional changes have been accompanied with large-scale protests, violence, and repression of free speech and human rights.

A change of guard is seemingly happening within the ranks of African presidents; dictators step down (Robert Mugabe, Jose Eduardo Santos) in one part of the continent, but those numbers are offset by younger ones (Joseph Kabila, Pierre Nkurunziza) digging their heels in another part of the continent.

The African Union is also currently part of the problem. Its current Chairman, who is in a largely ceremonial role, is Paul Kagame. He has been president of Rwanda for 18 years, and could also be its president till 2034 after amending the constitution to extend term limits in 2015.

AU’s chairperson Moussa Faki wrote a much publicized letter to Uganda’s Yoweri Museveni earlier this month to intervene in the constitutional crisis in Burundi. However, it would be an issue of pot calling kettle black, since Museveni, who has been Uganda’s president since 1986, also scrapped term limits and presidential age limits in Uganda.