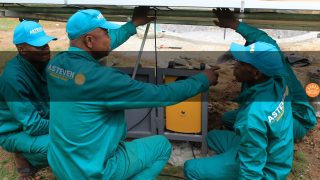 Following the recent launch of Asteven Group’s energy academy, Nigeria has become the first country in sub Saharan Africa with an academy where green vendors, service providers, installers, technicians and dealers in renewable energy technologies can be trained into reputable professionals.

As a green energy solution provider company, and as part of its commitment to tailor a holistic approach to sustainability while playing a greater role in stimulating the adoption of efficient practices in doing business in Africa, the group says the academy is built primarily and structured in line to support rapid developing markets for renewable energy and energy efficient industry.

The event which took place earlier in the week has thus been described as a timely intervention –particularly for the fact that the nation currently battles for self sufficiency in electricity generation and distribution. According to the green energy solution providers the curriculum of the academy will facilitate the receipt of global professional certifications in each area of study.

While speaking on the dire need for the creation of jobs and opportunities during the launch of the Asteven Renewable Energy Academy and Centre of Excellence, in Ogun State, the Managing Director and Chief Executive Officer, Asteven Group, Dr. Sunny Akpoyibo, noted that the Academy was borne out of the necessity to develop local capacity, change the course of power access in Nigeria and increase job creation. Akpoyibo also expressed his discontent with the horrible state of power in the country, bringing to the public’s notice that about 60 percent of Nigerians do not have access to modern forms of energy.

The academy initiative comes on the heels of an earlier installation project of over 20 megawatts of renewable energy in Nigeria. The Asteven group is, no doubt, setting the pace in the renewable market revolution as their project did not only help to light up project areas but also help in the reduction of ozone-unfriendly Carbon dioxide (CO2) emission in the country.

According to reports, about 94 percent of Nigeria’s population depends hugely on fossil fuel, generators, kerosene, wood fuel etc. Adding to existing narratives surrounding the crippling growth rate of development in Nigeria, lack of energy has become one of the nation’s greatest threats. Thus, the federal government needs to intensify all efforts to provide resources that will improve energy access in the country.