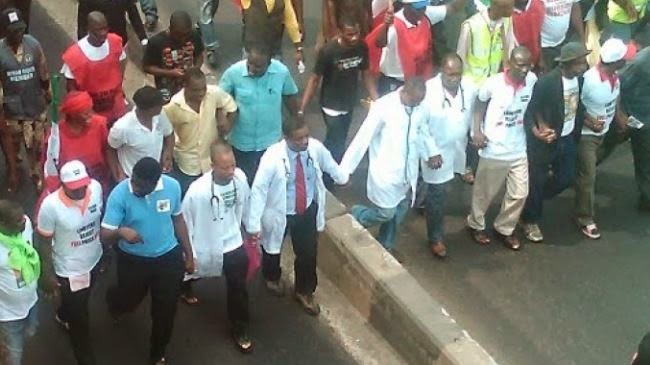 On Tuesday, the Association of Resident Doctors (ARD), Abuja chapter, announced the commencement of an indefinite strike in protest over unpaid salaries. This began about an hour after Nigeria confirmed its third case of COVID-19,  a woman that arrived Lagos via a British flight from London.

They accredited the salary irregularities and shortfalls to the migration to the Integrated Personnel and Payroll Information System (IPPIS) platform by the FCTA, issued by President Muhammadu Buhari in October. The directive was issued for the implementation of the IPPIS for the payment of salaries of all federal government workers.

The president instructed that all workers must be on the platform as any worker not on the platform will not receive a salary after October 31. This was strongly opposed by university lecturers.

The doctors explained how the shortfalls in the payment of salaries are affecting their lives. “Our members were thrown into serious financial distress following the non-payment of our salaries as at when due and we waited patiently after the end of the year 2019 and the new year 2020 celebrations, till the third week of February, only for us to receive a paltry sum of money as January salary”, Roland Aigbovo, the ARD president explained in a statement.

Aigbovo further stated that after considering the emergency situation of the COVID-19, the doctors had issued a 14-day ultimatum and a seven-day extension which ended on Friday, 13th March 2020. The government swiftly responded to this as they began payment of February salaries with no third-party deductions like pensions, tax, NHF, association’s dues, cooperative contributions and others like loan repayment on Friday, March 13th.

They also listed several other demands of the association on which doctors reaffirmed that the indefinite strike will continue if the demands are not met. They include payment of skipped arrears, payment of first 28 days (already approved by the FCT minister), improvement of security in hospitals, provision and maintenance of equipment and infrastructure in our various hospitals and payment of 2016, 2017, 2018 promotion arrears.

Having observed how the stake in global cases of COVID-19 has increased the demand for services of health workers, especially in countries severely affected, the Abuja resident doctors affirmed that they have deliberated extensively on the health threat posed by COVID-19, their work conditions, and patient care before arriving at the “difficult decision.”