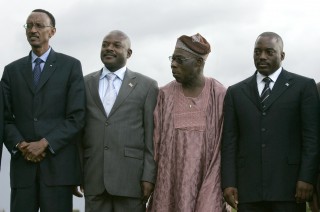 Are presidential term limits that important for African Democracies?

Lawmakers in Rwanda have unanimously backed a motion to remove the two term limits in the country’s constitution in order to allow President Paul Kagame run for a third term and many more future terms if he so wishes. The move comes after nearly four million Rwandans signed a petition asking the Parliament to scrap the presidential term limits. The lawmakers still cannot unilaterally amend the constitution, the final decision will be made by a national referendum, but it is widely expected that an overwhelming majority will side with giving Kagame as many shots at the presidency as he wishes.

However, Kagame has not publicly stated that he wants to run for office again, although he has said that he is open to persuasion that the two-term limit in the constitution needed to be changed. Despite this presidential (public) non-interference with the amendment process and its actual mass appeal, the local opposition and international democracy activists have described the move as tyrannical of Kagame and his party and harmful to the development of the country’s democracy.

Like Rwanda, its neighbour Burundi is also mired in a third term controversy, although the president and his party’s argument is a lot more skewed. Pierre Nkurunziza and his CDFDD party argue that he is  not breaking the constitutional limits of two terms, because in his first term he was elected by the parliament and not a popular vote. That logic, although accepted by the country’s Supreme Court, has triggered a social unrest that is threatening to drag the country back into the civil war that it just came out of only a decade ago. Nationwide protests succeeded in upending the desire of former Burkina Faso president Blaise Compaore to remove his country’s term limits. Tension is also brewing in the Democratic Republic of Congo where President Joseph Kabila is expected to seek to stretch his 14 years in power past the current term limits.

Since the turn of the millennium, not less than ten African governments have tried to remove their country’s presidential term limits or stay in office beyond it. Among the world leaders that have criticised this trend is French president François Hollande who has intervened severally in the sociopolitical unrests in francophone African countries. “What the Burkinabe people did should give pause to those who would like to stay in power in violation of constitutional rule,” Hollande said following the unseating of Compaore in 2014. “I think this could serve as a lesson to many heads of state, and not only in Africa, not to change the constitutional order for personal gain.”

But the Rwandan government and it’s supporters argue that the case is different for the country. They say its the people, a huge majority of them, that want the president to contest again and remain in office. “The petitioners hail president Kagame for having stopped the genocide and bringing quick economic recovery,” Uwimanimpaye Jeanne d’Arc, vice speaker of the lower house, said in the parliament yesterday. Kagame has indeed been widely acclaimed for bringing stability to a country torn apart by genocide, and rapid economic growth and development for a people who were in abject poverty just over a decade ago.

Kagame has also been criticised as much for clamping down on dissent and gagging the press. It is part of the reason the tenure elongation campaign is going smoothly with little protestations, his critics argue. “Dissent is very violently and swiftly repressed by the government,”  Yolande Bouka, a Nairobi-based researcher for the Institute for Security Studies, told Reuters. “The likelihood of protests as we saw in Burundi and Burkina Faso or even Senegal a few years ago is quite unlikely.” The opposition Green Party is trying to block the move in the supreme Court, it’s head Frank Habineza said.

There is little expectation that the apex court will block the move because it is following the due constitutional process. This, in fact, is the crux of President Kagame’s criticism of those criticising the campaign to remove term limits. “There are too many things said about it; in my view many times, exaggerated,” he told some Ugandan journalists in June. “I don’t think the problem (of leadership in Africa) can be solved by term limits, neither, I would I say term limits are a solution to Africa’s problems.”

Kagame argues that what Africa needs are responsible and effective governments regardless of term limits. “Have we managed to put in place institutions that define us and serve us beyond this single discussion of term limits? Creating rule of law, parliament that functions, civil society and private sector doing what they should do. Do we have government in places that are responsive to people’s needs beyond thinking about these term limits or no term limits? Term limits have nothing to do with democracy.” The African Human Security Initiative argues it absolutely does. “Too often power is shifted from one leadership to another through violence or the threat thereof. African leaders have tended to remain in office for too long, in many cases for several decades, usually becoming increasingly unresponsive to the needs and wishes of the population as the years go by. A prudent look at the continent’s post-colonial history should thus lead to the conclusion that term limits are not just desirable but necessary,” Anne Hammerstad wrote in a monograph for the organization.