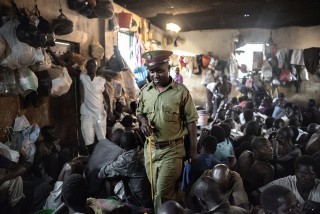 Pollsmoor Maximum Security Prison near Cape Town in South Africa, is being evacuated after several prisoners died from rat infestation-related disease. The evacuation took place to combat the spread of leptospirosis- a transmittable bacterial disease that occurs in some animals. Established in 1964, the Pollsmoor prison has jailed Nelson Mandela and several other anti-apartheid activists.

For the past decade, South Africa’s prisons have struggled with overcrowding, which in turn has put pressure on existing ventilation channels, sanitation, medical care and other basic amenities. Prisoners are also not allowed out of their overcrowded cells for more than two hours a day.

Research has shown that for every 100,000 people in South Africa, 200 are imprisoned. This gives the country the second highest incarceration rate in Africa after Rwanda. In 2013, with over 150,000 inmates it was also ranked ninth in the world’s prison population list. With high numbers of inmates and degenerating living conditions, prisons, which are supposed to be correctional centers, have become a disease hub, where infections spread rapidly among the inmates.

Overcrowding in prisons is a growing menace in most African countries. Zambia’s prisons which have been described by the International Human Rights Group as some of the worst in Africa, house about 15 inmates in a prison cell originally built to accommodate one.  In Ghana, prisons that are made to hold a population of 16,000 now hold over 42,000 inmates, which has given a rise to tuberculosis, hepatitis, HIV and many other infectious diseases. In Malawi, reports indicate that prisons are so over crowded that prisoners have no space to sleep. They have to sit up throughout the night in the dirt and stench.

Malnutrition is another primary effect of an overcrowded prison. In the Chichiri prison Malawi, over 15 people suffer from malnutrition in a month. This is because most prisoners eat a meager ration of corn meal only once in a day.

According to the Universal Declaration of Human Rights, no one should be subject to torture, cruelty or any form of degrading form of punishment, but this rule does not apply in most overcrowded prisons as violence is usually on the rise. Due to limited spaces and supplies, there is a tendency for bullying, coercion and conflict among the prisoners and the warders.

While building and maintaining prisons in Africa is an expensive venture, the recent tragedy in South Africa highlights that we don’t have a choice.  In Ghana, the slow process of the judiciary system is a contributing factor to over population in prisons. Instead of sentencing minor offenders to prisons, perhaps other nations could take a hint from Zimbabwe and sentence these petty offenders to community service. While countries such as Finland underscore that prisons are for rehabilitation, rather than mere punishment, perhaps it’s time for countries such as South Africa to take a page from the same book and have a critical conversation on the role prison should play in their society.