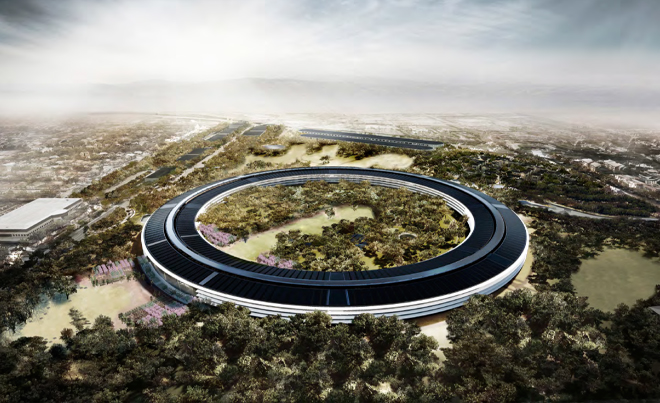 When in April 2006, Former CEO Steve Jobs announced to the city council of Cupertino that Apple had acquired nine adjoining properties to build a second campus, it left many with budding anticipation of what to expect as regards what the technology giant had in mind for the project. The project which is going to be Apple’s new headquarters, is currently under construction and has been described by industry insiders as “going to be big”.

The office which according to its CEO Tom Cooks will be the “Greenest” is so big; the Cupertino Company has spent $161 million on the auditorium alone. HD images of the campus not due to be completed until the end of 2016, was released recently, showing the extent of the work done so far, which clearly is coming along well and on schedule.

Dubbed the ‘spaceship’ due to its futuristic circular shape like a flying saucer, the 176-acre campus is believed, will accommodate an estimated 12,000 employees upon completion. A close look to other exciting features of the new campus, located at Cupertino, California, reveals a 300,000 square feet of research facilities and underground parking lot. The four-story circular structure will also have huge walls of glass that will allow employees to look out from both sides of the ring.

Apple has had a presence in Cupertino since 1977, which is why the company decided to build in the area rather than move to a cheaper, distant location. Estimate of the total cost of the project is summed as $5 billion and is being handled by British architectural firm, Foster and Partners.