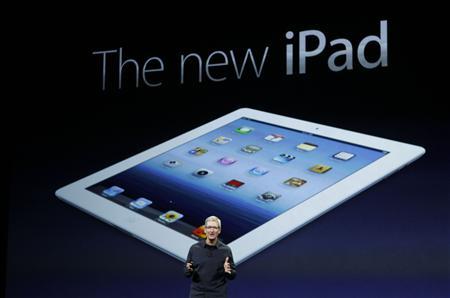 Apple unveils the latest member of the iPad family

(Reuters) – Apple Inc’s latest iPad sports a crisper display and an array of technology advances that, while less than revolutionary, may prove enough for now to keep rivals like Amazon.com Inc and Samsung Electronics Co Ltd at bay.

While stopping short of vaulting ahead of Motorola and Samsung, the device — which comes 4G-ready and boasts a quad-core graphics processor — is capable enough to help safeguard its two-thirds market share. “The screen is a notable feature for non-techie customers, as is the faster connectivity. That’s something that mainstream consumers can identify with,” said Morningstar analyst Michael Holt. “There’s pent-up demand because a new device was widely anticipated. I they’ve made enough incremental improvements to do well.”

Other analysts say the faster processing may begin to draw heavy gamers, encroaching on turf now dominated by gaming-hardware makers such as Microsoft or Sony.

Chief Executive Tim Cook, presiding over his second major product launch after debuting with 2011’s voice-enabled iPhone 4S, introduced the highly anticipated third iteration of the tablet, which is available for pre-orders from Wednesday and will hit store shelves March 16.

But he stumped many in the audience by breaking away from the tradition of calling the third-generation tablet the iPad 3, as some had expected, referring to it simply as the “new iPad.”

The company said it will continue to sell the iPad 2 but dropped its price by $100. The older tablet now starts at $399 while the new third-generation wi-fi only iPad starts at $499.

The high-end model of Apple’s latest iPad starts at $629 and will be capable of operating on a high-speed 4G “LTE,” or Long-Term Evolution, network. At speeds roughly 10 times faster than current 3G technology, that may help banish the sometimes shaky video quality of older devices.

Wall Street had anticipated many of the features Cook showed off on Wednesday, including a higher-definition “retina display” screen – containing several times as many pixels within the same area – and a better camera.

Shares of Apple closed barely higher, up 43 cents at $530.69. They hovered around $530 throughout the unveiling event, which was attended by Marc Benioff, CEO of enterprise cloud computing company Salesforce.com Inc; Jeremy Stoppelman, CEO of online business review site Yelp Inc; and influential venture-capitalist John Doerr, among other industry luminaries.

Some had held out hope of a positive Apple surprise, recalling late CEO Steve Jobs and his now-iconic “one more thing” at the very end of such announcements. Others said the upgrades and tweaks to the iPad could only go so far in fending off hard-charging competition.

“While the hardware is notably enhanced, with an impressive retina display, better camera and faster processor, there are still some areas of improvement that Apple needs to work on, in order to stay ahead of its encroaching competitors,” said Fred Huet, managing partner at Greenwich Consulting.

“As tablets are increasingly being used for personal media consumption, it is promising to see a better screen resolution. But will this be enough to ensure Apple’s competitive lead in the marketplace? No.”

Others say Apple is betting a 4G-equipped iPad will tempt more U.S. consumers to pay for higher-quality video on the go. That, in turn, should give Verizon Wireless and AT&T Inc a revenue boost, analysts say.