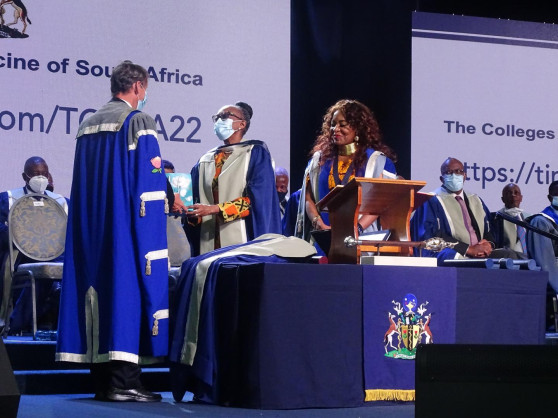 On Thursday, 20 April 2022, Dr Matshidiso Moeti, the World Health Organization’s Regional Director for Africa was admitted to the Honorary Fellowship of the Colleges of Medicine of South Africa (CMSA). The formal ceremony that was presided over by Professor Flavia Senkubuge, the President of the Senate of the CMSA took place at Rhema Bible Church in Morningside suburb of Johannesburg city of South Africa. In addition, present at the event were the distinguished CMSA’s Officers and Senate. The ceremony also hosted the many recipients of diplomas, certificates, and fellows of the CMSA who were joined by their family members and friends.

Professor Johan Fagan, the Vice President of the CMSA delivered the award citation for Dr Moeti. While making the presentation, Professor Fagan noted that Dr Matshidiso Moeti, as the first woman elected to lead the work of the World Health Organization in African Region, “devoted most of her life to battling poverty and inequality, striving to realize her vision of securing health and well-being for all Africa’s people, regardless of age, socio-economic status or geographic location.”

Dr Moeti has been conferred the prestigious Fellowship, which is also the highest honor of the CMSA, for her unique and outstanding contributions to the health of people of Africa that brought about tangible impact in improving health and well-being for the communities, countries, and region as a whole.

In her keynote speech, Dr Moeti thanked the President as well as all members of the Colleges of Medicines of South Africa and congratulated the diplomates, fellows, certificants.

As Dr Moeti addressed the graduates of the CMSA she noted that “In so called normal circumstances, postgraduate specialization pushes you to the limits of your physical and mental capability, but the onset of the pandemic during your training has delivered some of the worst circumstances imaginable. What you have gained, however, are unique and invaluable skills and expertise that will surely ensure that you are better prepared for future challenges, both professional and personal.”

While emphasizing the important role of health professionals and scientist, Dr Moeti noted that “ We have a responsibility, especially as scientists, to not only produce the brilliant tools that will improve health across the globe, but to clearly communicate the benefits of those tools to politicians, communities and ordinary citizens. As scientists, and as medical professionals qualifying today, we need to always remain connected to the impact of what we do, what we produce, what we work on, and how this is going to be deployed on the ground – regardless of our field of focus.” she added.

The list of accolades and awards received by Dr Moeti during her professional service include an Honorary Fellowship from the London School of Hygiene and Tropical Medicine, an Honorary Doctor of Science from the University of Health and Applied Sciences in Ghana, Honoris Causa Doctorate by Instituto de Higiene e Medicina Tropical Universidade Nova de Lisboa. Dr Moeti was also named COVID-19 Heroine by Ellen Johnson Sirleaf Presidential Center for Women Development as well as featured among the Women of 2020 in the Financial Times. Recently, Dr Moeti was honored with Membership of the United States National Academy of Medicine and Special Recognition for African Health Leadership on COVID-19 from Amref Health Africa and received a Global Health Equity Award from the Africa-American Institute.

Sincere congratulations to Dr Matshidiso Moeti on becoming an Honorary Fellow of the CMSA. WHO also recognizes and warmly applauds all other graduates of the CMSA for their hard work and their outstanding achievements and extends the best wishes for their future.

Distributed by APO Group on behalf of World Health Organization (WHO) – South Africa.