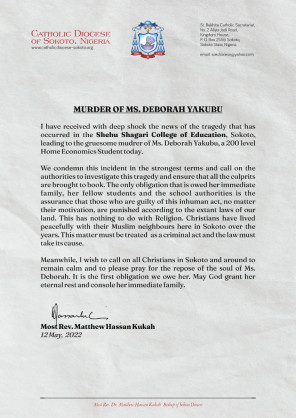 A 200 level female christian student, Deborah Yakubu, was stoned to death and set ablaze at the Shehu Shagari College of Education, Sokoto.

Deborah allegedly had argument with fellow students online and the muslims among them claimed that she blasphemed prophet muhammad.

The interaction reportedly took place during the muslim moon of Ramadan when the College was on break. When they sighted her at the school today, all available muslim male students surrounded her and started stoning her.

They continued until she fell. They made sure she died and subsequently set her body ablaze.

The Catholic Bishop of Sokoto Diocese, Most Reverend Matthew Hassan Kukah expressed sadness that such inhuman act was carried out in Sokoto.

In a statement, Bishop Kukah condemned the act in very strong terms. He called on the Sokoto state government and the relevant authorities to investigate the incident to ascertain the cause of the action and bring the perpetrators of the act to book.

He said the only obligation owed the parents of the murdered student, her fellow students and the College is to ensure that those who carried out the act are punished, no matter their motivation.

The Bishop added that what happened has nothing to do with religion as christians have been living peacefully with fellow muslims in Sokoto over the years.

Bishop Kukah called on all christians to remain calm and pray for the repose of the soul of Deborah Yakubu.

Meanwhile, the Shehu Shagari College of Education Sokoto has been shut down.

Distributed by APO Group on behalf of Catholic Diocese of Sokoto.