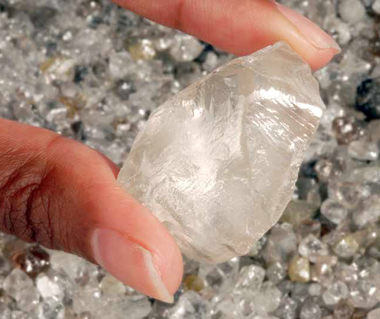 Angola is Encouraging its Small Miners to Consider Diamond Exploration

Angola has given the green light for diamond mining to small scale mining consortiums; the Organization for Artisanal, Semi-Industrial Diamonds Exploration and the Nharea Diamond cooperative.

According to Angola Ministry of Geology and Mines, the diamond rich southern African nation has “approved rights for artisanal diamond mining in a total area of nearly 500 square kilometres in northern interior of the country.”

“The concessions are granted, according to the orders from the Ministry of Geology and Mines Organization for Artisanal and Semi-Industrial Diamonds Exploration – OEASID) in the Cuango basin, and to the Nharea Diamond cooperative, in the Dando Kwanza area,” the Angolan Mines Ministry added in a statement.

Most of the diamond mining in Angola is done by multinational companies and public organisations.

Angola is the third largest producer of diamonds in Africa. Its mining industry contributes 12 percent to GDP (excluding the oil sector), of which diamonds are responsible for over 98 percent of that. But only 40 percent of the diamond-rich territory within the country has been explored.