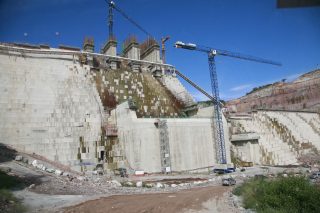 Making the transition to low carbon development is not an easy task for most countries. Angola has set ambitious targets and is on the way to achieving them.

Under the 2015 Paris Agreement, Angola committed to unconditionally reduce up to 35 percent of its greenhouse gas (GHG) emissions by 2030. It also agreed to a conditional mitigation target – an additional 15 percent reduction – making Angola’s commitment one of the most ambitious of the 195 countries that signed the document at the 21st UN Framework Convention on Climate Change.

But Angola is also the second largest oil producer on the African continent, which begs the question: if the hydrocarbon industry is largely responsible for GHG emissions in the country, are the country’s international engagements actually achievable? And if so, how?

“Angola has a five-year goal of reducing carbon intensity in electricity production. That’s our contribution,” says Giza Martins, director of the Climate Change Office of the Angolan Ministry of the Environment.

As a developing country, Angola has not committed to global goals. Instead, the country’s proposal, Martins notes, is “circumscribed to the energy sector” and based mainly on “the construction and start-up of large hydroelectric plants.” Boosting electricity production would allow the country to diversify its economy, developing its agricultural and industrial sectors to break away from its all-in-oil paradigm.

Over the last decade, more than USD 17 billion has been invested in the renewable energy sector, which equals 35 percent of the country’s public debt contracted until 2017. This decision relies on the hydroelectric sector to supply largely populated centres, and on solar energy systems to supply remote off-grid regions, small local networks and communal townships through the government’s “Solar Villages” program.

“These goals can be viable if there is a serious investment, not only in hydropower, as is being done with the construction of the Laúca and Caculo Cabaça dams, but also with the implementation of mini-hydro, wind energy and solar systems, as stated in the 2025 Angola Energy Strategic Plan,” says environmentalist and executive director of the environmental Kissama Foundation Vladimir Russo.

Today, hydroelectric plants supply 78 percent of the electricity produced in the country. One year ago, the supply rate was 60 percent, said the Angolan President João Lourenço, in his address to the nation last August.

By 2022, investment to increase the annual green energy output is expected to rise to USD 23 billion. From 2006 to 2016, total energy production rose from 2.983 GW to 10.710 GW, according to figures from the Ministry of Energy and Water, but it is still insufficient to guarantee the country’s full electrification.

The effort made in the last decade is easy to see (or rather hear), since two years ago, the loud noise of generators – a large source of GHG emissions – was constantly present in the capital, Luanda, and most of the country. Now, the country is looking at the potential of renewable energies: solar, with a potential of 17.3 GW; hydroelectric plants, with 10 GW; wind, with 3.9 GW; and electric power from biomass, with 3.7 GW.

Such potential is a business opportunity for the private sector, Russo notes. He says companies can contribute to the country’s efforts, as some do already, with “investments in projects to reduce GHG emissions, replacing fossil fuel-dependent technologies with green energy and sustainable forest management.”

The goal of the National Strategy for Renewable Energies, approved by the Ministry of Energy and Water in 2015, is to reach 70 percent of renewable capacity by 2025. This objective would be reached through a series of GHG mitigation measures, which include regulation of the electricity sector and a reduction in emissions from oil and natural gas exploration and production. Natural gas, for instance, accounted for 49 percent of the global GHG emissions in Angola in 2005, the first and only year these emissions were studied.

To this end, the government’s plan is to take advantage of the gas released in the production of hydrocarbons – “a carbonic gas very close to methane,” explains Martins. Today it gets burned, when it could be put to use. The Gas Law passed on May 18, regulates the activity of oil operators, as well as the Oil and Gas Agency, which is slated to be created by 2020.

The success or failure of the entire Angolan strategy will be measured by the National Monitoring System for emissions from the grid, which, according to Martins, will be installed in all sources of energy production, including in the oil industry. This system will measure how well the government fulfils its environmental goals. But Russo points out that Angola’s citizens, “normally guided by high consumption patterns only restrained by financial difficulties,” have yet to realise the extreme significance of climate change and become guardians of the air that they breathe.