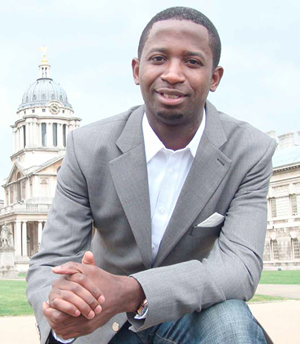 In January 2009, Kola Oyeneyin, a computer science graduate cum-senior business analyst at Hewlett Packard, said goodbye to his Fortune 500 job, its associated prestige and generous pay cheques, as well as his near-hatched plan of an MBA at Harvard Business School, and returned home to Nigeria. While his initial career plan was to become a major player on the American tech scene, a Christmas holiday in Nigeria made him realise the vast opportunities and wasted talents in his home country. @MrSleevesUp – as he is fondly known on Twitter – decided to take action. “I’m often asked why I’m so passionate about Nigeria,” he says. “I ask ‘why not?’ Am I not Nigerian?”

Oyeneyin returned home bursting with enthusiasm, barely able to contain his ideas, only to be hit with the realisation that Nigeria suffered from a business crippling absence of infrastructure. For example, Nigeria, Africa’s second largest economy, produces some 5,000 megawatts (MW) of electricity for its 160 million people, while South Africa produces 40,000 MW for its 50 million-strong population. With businesses in Nigeria relying primarily on generators for power, the price of doing business in the country is exorbitant, thinning profits and escalating market entry for start-ups.

With an unemployment rate of over 28 percent, Nigeria hopes entrepreneurship can engage its over 30 million unemployed nationals, while also attracting foreign investment. The power debacle poses a huge threat to public-private efforts to boost entrepreneurship in the oil-rich country, a problem Oyeneyin is determined to mitigate. “Our team carried out a survey of the business district areas of Lagos and discovered a lot of entrepreneurs in the areas were working from home, hotel lobbies, food joints and basically from anywhere they can get two major things – stable electricity and Internet service,” he says. Oyeneyin’s solution would provide business people with access to fundamental business infrastructure at affordable rates, allowing them to effectively run their operations. And so Venia Business Hub was born.

Outside of Nigeria, business hubs are known as virtual and serviced office spaces where clients can essentially set up shop at a space of their choosing, plug in and start working. Power, Internet access, office furniture and a centralised reception and support desk are already provided. In the event of a power cut, Venia has a 250 KVA standby generator and an inverter with a 12-hour battery life to provide backup. The serviced workspace provider also has a double backup for its Internet service.

While the concept of a serviced workspace is not a novel one for Nigeria, Venia’s flexible and pro-entrepreneurial approach certainly is. The hub’s solution for small business owners – many of whom struggle with limited capital – is charging for its services on a monthly basis, rather than the burdensome annual rental system adopted by many real estate agents in Nigeria. On average, a small business owner in Lekki (an upscale Lagos neighbourhood), would have to pay an initial capital amount of N2 million ($12,700) to rent a decent two-man office for one year. This excludes the cost of equipping the space with all the necessary business facilities or the recurrent running expenses. With Venia, clients can start working from an office with 24-hour power and Internet access, as well as admin support, a central front desk, meeting rooms and large boardroom, among other amenities, for as little as N60,000 ($379) per month – or an agreed stake in the customer’s company.

“What I’ve found out about disruptive innovative solutions is that if you’re adding value, sometimes it markets itself,” Oyeneyin says. “Businesses here have been able to grow more profits because of reduced capital and recurrent expenditure and the word has gone out without Vernia having to do major advertising.”

Oyeneyin launched the hub in September 2011 and news about the innovative new business solution spread quickly. To date, more than 60 companies have used the hub’s services. What started as a respite for small enterprises and start-ups has grown swiftly into an attraction for large businesses and multinationals as well. “A year ago, a multinational with 32 offices worldwide wanted to expand to Lagos,” Oyeneyin says. “They came to the hub, liked it and now they are here. We have a couple of multinationals here now.”

In 2011, Venia Consulting – a sister company of the business hub, which offers business support services – conducted a survey of 500 entrepreneurs to determine what they needed most for business survival and growth beyond the five year mark (95 percent of businesses in Nigeria collapse before their fifth year anniversary). Some 92 percent of the respondents indicated that they needed funding to sustain their business.

Oyeneyin says that while small enterprise owners and entrepreneurs often regard the lack of finance as their biggest limitation, he believes it to be a lack of basic business education. “Some SMEs which have been trading for years can’t even produce an audited account when they need credit,” he says in disbelief. “Entrepreneurs complain that family and friends are not lending to them and it’s either because their ideas are not powerful enough or they are selling the wrong thing. There’s a concept in business that is called ‘the what’, ‘the how’, and ‘the why.’ Often entrepreneurs pitch to investors and talk about what they are doing and how they are doing it, but are silent about ‘the why,’ which is the most important reason investors buy into propositions. The ‘why’ talks about your cause and what you’re trying to create or solve. When you’re marketing, don’t tell people what you’re marketing but why you are marketing.” According to Onyeneyin: “People don’t invest in what you do, they invest or pay for why you do it.”

Venia’s first and only business hub, located in Lekki, recently broke even. Oyeneyin plans to replicate the model across Lagos and in time, the rest of Nigeria. It is an ambitious plan but Oyeneyin says he is in it for the long haul.