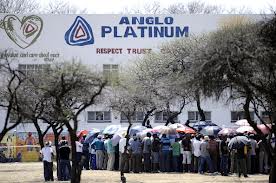 World’s largest platinum producer, Anglo American Platinum (Amplats) on Monday said it has concluded consultations with key stakeholders and unions on its restructuring plans and it would discharge about 6,900 workers in South Africa as from September 1.

However, the ultimate number of retrenchments will depend on the conclusion of the retrenchment avoidance measures which include voluntary severance packages, early retirement, redeployments and the filling of internal vacancies.

The restructuring plan was done in a bid to return the company to long-term profitability and increase its competitiveness in the global platinum mining industry.

As part of its restructuring plan, Amplats says it will increase its baseline production to 2.2 – 2.4 million platinum ounces per annum in the short- to medium term; consolidation of the Rustenburg operations into three operating mines by integrating the Khuseleka 2 and Khomanani 1 and 2 mines into surrounding mines. The Union North and South Mines will also be integrated into one mine.

Amplats also said it will be reducing overhead costs and improving efficiencies.

The proposed job cut will save Amplants around $400 million a year.

However, following the announcement, Unions, including the National Union of Mineworkers (NUM) vowed to oppose the layoffs even if it means embarking on strike.

“Our agreement with Amplats was to cut 3,000 jobs and those jobs would not be forced retrenchments but voluntary severance packages. This agreement was reached a week ago,” NUM spokesman, Lesiba Seshoka said.

Chris Hart, an economist, told Reuters that the job losses would have an impact on the macro and micro economy, in a country facing a massive jobless rate.

Figures released last month showed that 25.2 percent of the South African workforce was out of work.