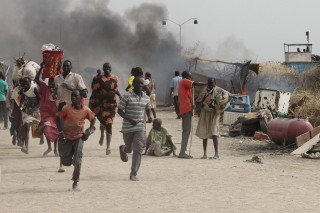 Amnesty International calls for an end to war crimes in Sudan

“The scale and brutality of these attacks is hard to put into words. The images and videos we have seen in the course of our research are truly shocking.” – Tirana Hassan, Amnesty International’s Director of Crisis

A recent report by Amnesty International (AI) revealed that the Sudanese government has been committing war crimes against its own people. This came after an intense investigation that was carried out by the human rights organisation.

According to the report, horrific evidence that was gathered proved the repeated use of chemical weapons against the civilians in Jebel Marra area of Darfur, by the Sudanese government forces. It was also revealed that 30 likely chemical attacks have been carried out since January and about 250 people have died.

AI’s Director of Crisis Research, Tirana Hassan, noted that their research reveals horrible pictures and videos of civilians affected by the chemical attacks. He further urged that the Sudan government’s actions should not be ignored.

“The scale and brutality of these attacks is hard to put into words. The images and videos we have seen in the course of our research are truly shocking; in one a young child is screaming with pain before dying; many photos show young children covered in lesions and blisters. Some were unable to breathe and were vomiting blood.

“It is hard to exaggerate just how cruel the effects of these chemicals are when they come into contact with the human body. Chemical weapons have been banned for decades in recognition of the fact that the level of suffering they cause can never be justified. The fact that Sudan’s government is now repeatedly using them against their own people simply cannot be ignored and demands action,” he said.

What you need to know about Sudan Civil War

In January 2016, the Sudanese government launched a military campaign on the Sudan Liberation Army (SLA), that has its base in Jebel Marra area of Darfur. The government launched both ground and air attacks in Jebel Marra. The military campaign was mainly to gain control over positions held by SLA members and put an end to the insurgent in Darfur.

To justify its offensive attacks, the government had once accused SLA of violent attacks on military convoys, commercial vehicles and civilians. The government forces have been able to dislodge the SLA from various territories that it controlled in Jebel Marra.

According to a report from UN organisation for the Coordination of Humanitarian Affairs in July, about 251,000 people have been displaced from their homes in Jebel Marra since January 2016. Lots of people have fled the city in search of safe haven.

The joint efforts of UN and African Union (AU) to ensure peace in Darfur have been futile as conflict still persists.

How the Sudanese government is committing war crimes

According to the 1925 Geneva protocol, the use of poisonous gases and biochemical weapons is highly prohibited. In the same vein, International Law also prohibits the use of chemical weapons in any warfare. This is due to its devastating effect on the targets, which will lead to Mutual Assured Destruction (MAD).

To this end, the Sudan government’s military exercise in Jebel Marra is a war crime and  should not be ignored. This informed the reason why Tarana noted that “the use of chemical weapons is a war crime. The evidence we have gathered is credible and portrays a regime that is intent on directing attacks against the civilian population in Darfur without any fear of international retribution,”

It is worthy of note that the victims of these military campaigns are non-combatants, most of whom are children and women. The Sudan government’s military exercise did not respect rules of engagement and this is leading to loss of lives. In fact, there is severe collateral damage in Jebel Marra. According to AI’s report, Sudan government has engaged in bombing of civilians, unlawful killing of men, women and children, abduction and raping of women, forceful displacement of civilians, looting and destruction of entire villages. The reported noted 365 people have been killed in Jebel Marra between January and September. It also stated that hundreds of villages were destroyed. All these are instances of war crimes committed by Sudan government against its citizens.

Here are few revelations from victims:

“When [the bomb] landed there were some flames and then dark smoke…Immediately it caused vomiting and dizzying…My skin is not normal. I still have headaches, even after I took the medicine…The baby is not recovering…he is swollen…he has blisters and wounds…they said he would get better…but it is not working.”

“Several bombs fell around the village and in the hills…Most of my kids are sick from the smoke of the bombardment…They got sick on the day of the attack…They vomited and they had diarrhoea…They were coughing a lot…Their skin turned dark like it was burned.”