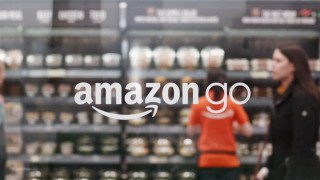 What does Amazon Go mean for the future of retail and small businesses?

I hate queues. I hate seeing them anywhere. At the supermarket, at the bus stop, waiting to get on a bus, or at a ticket stall. Queues are a waste of anyone’s time–well, except the owners of the commodity for which people are queueing. I doubt the cashiers or ticketers that have to deal with long queues–full of people with different ways of conducting themselves–like the queues too. So, I hate queues and that is why I think Amazon Go is a brilliant idea.

In case you missed it: What is Amazon Go?

Amazon Go is a concept store in Seattle, Washington, that lets customers shop without going through a checkout line. A system logs whatever a shopper picks off the shelf and syncs this data to a handheld device preinstalled with the Amazon app. Then, as the shopper exits through a “transition area”, the system adds up whatever they’ve bought and charges it to their Amazon account.

The concept is further explained in Amazon’s patent filing:

A lot has been said about what the possible proliferation of this concept could mean for the future of work. Just as with self-driving cars putting human drivers out of work, and factory machines putting factory workers out of work, the general idea is that the self-checkout model could put human cashiers out of work.

However, Roger McNamee, a tech investor argues that human employees are still a vital part of the retail experience. Speaking to CNBC, McNamee said, “I don’t expect this to take over the world. It just doesn’t seem like an earth-shattering thing.” But, he added, while Amazon’s new model may not totally blot out cashiers, it could help eliminate some of the challenges–such as inventory loss caused by employee theft, damage in store or in transit, etc.–that will come with the imperfect self-checkout model. This model, McNamee says, could work better in places like grocery stores as opposed to stores where luxury treatment that comes with human interaction is part of the brand package.

At the moment, McNamee’s argument is valid, but what happens when human life finally evolves to the point where we have no time to spare for ‘trivialities’ such as shopping, a point where, no matter how ‘luxurious’ a product is, we just want to walk into the store, get it and get out because, through the internet and virtual reality, we already know all we need to know about the product before coming to the store in the first place? Humanity will get to a point–and it is already on its way–where there will be too many things competing for our attention and any moment we can squeeze out to do the most consequential things will be too valuable to waste. It is en route this point that we must start to wonder what the impact of the large-scale execution of this self-checkout model will be on humanity–more especially small businesses that cannot afford to compete with Amazon because they neither have the funds nor the access to this technology.

What could this mean for retail and small businesses in Africa?

Amazon is not the first company to try this out, and the technology is not new; it’s been around since the 90s when the self-checkout machine was invented by Howard Schneider. Over time, the technology, though largely obscure, has evolved and different forms of it have been tried out by Walmart, Home Depot, CVS and Albertsons. But it is safe to say that Amazon has now stepped it up.

Although Amazon has said it has “no plans to open 2,000 [physical stores across the United States]. Not even close. We are still learning,” if history has taught us anything, it is that it’s only a matter of time before this technology scales. And when it does, it will be facilitated by large-scale retail corporations–the ones with the money and manpower to pull it off.

For a while longer, the self-checkout model will be expensive to set up and will be exclusive to the big retail companies. Also, for the next couple of years, the technology will be exclusive of Africa and won’t have much impact on the way retail business are run and the way consumers make purchases around here. We can take a cue from ecommerce, a business model which has struggled to take root on the continent mainly because of the generally low standard of living and the difficulty that comes with getting people to change their behaviour and trust new forms of technology.

However, as with smartphones and the internet which used to be so expensive and hard to come by in Africa but are now pervasive, the self-checkout model will eventually take root and spread around the continent. The more big players come into the market with this model, the better the technology will become. And as the technology impoves, it will also become more democratised and barriers of entry will be lowered for more people to have access to it.

At the point where the technology becomes more available for small-scale retailers in Africa to adopt it, there will be a level playing field. But at that point, where human interaction has been largely driven down, the quality of customer service will be based on the quantity and quality of a store’s inventory and its pricing. People will judge a store less by the people in it and more by the things in it. One cannot help but think that the companies with the big bucks will stiffle the smaller ones: they will have larger inventory and cheaper prices, so the smaller stores will struggle to compete with them.

How long it will take for the ‘Amazon Go’ model to become pervasive and be adopted by African businesses is yet to be seen. But as with PCs, smartphones, and the internet, its adoption will be largely based on how quickly it can become accessible to the mass market. There is no questioning its utility, so it’s not too early for us to start thinking about the impact of the self checkout model on small-scale retail businesses in Africa.