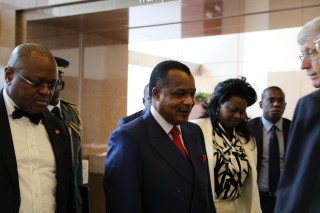 Alongside Congo’s President Sassou Nguesso, here are 5 African presidents who have bid for a third term

Congo’s President Denis Sassou Nguesso’s bid for a third term will continue as yesterday members of his ministerial cabinet proposed a referendum to review the constitutional restriction for a third term in office for any president. The proposed referendum will also scrap the age limit of 70 for any presidential candidate, this is also in favor of the 72 year old President.

In August, the President who has spent 30 years in two separate spells as President, sacked two ministers who came out publicly to oppose his third term plans. Oppositional parties in the country called it ‘a constitutional coup.’

This development follows a trend in other African countries where Presidents have reneged on their words to contest for a third term in office. This trend has resulted in an uproar from citizens of these countries, with some of them resulting in riots and even a coup.

Here are five African Presidents who have set the pace in this trend:

Thomas Boni Yayi began his first term in Office in 2006 after ousting sitting President Mathieu Kerekou in an election that was considered free and fair by international observers. A Banker by profession, he was re-elected for a second term in Office in 2011 after overcoming an impeachment for his alleged involvement in a Ponzi scheme in 2010. This scheme cheated about 100,000 investors out of their money in the West African country. Boni-Yayi also survived two separate assassination attempts, one in 2007 and another in 2012, allegedly organized by his niece.

These events indicated the level of opposition he faced in his country. His bid to contest for a third term however was stopped in its tracks by the people of Benin Republic in parliamentary elections held around the country in early 2015. Seeking to amend a constitution that restricted Presidents to two terms in office, his party lost seats in a parliamentary election. Constitutional reforms in Benin republic require a four-fifth majority of the parliament. Yayi’s party fell short of this, winning only 32 seats from 83 seats in the parliament thus putting an end to his third term bid.

Born in 1926 in Kebemer, Senegal, Wade became President in 2000. A constitutional amendment was instituted in 2001 limiting presidents to only two terms. Nicknamed “the Hare” because of his cunningness, Wade argued that the new law did not apply to him because it came in place after he became President.

Another part of the constitution which became effective in 2007, reduced presidential terms from seven to five years. However, this did not stop Wade from winning a second term in 2007, sparking widespread protests from opposition parties. He gave his word at the time that he would not run for a third term which, but that did not hold.

After he was approved by the courts in 2011 for a third term, there were violent protests by angry mobs who made reference to his promise not to run for a third time. He eventually lost the election in 2012 by a very wide margin to Macky Sall.

Paul Kagame, is the first democratically elected president in Rwanda, having won a landslide victory with a total of 95.1% votes.

Kagame contested for a second term in the 2010 election, and Kagame, and won by 93.08% of the votes. The election smacked of irregularities and violence. Human rights groups, namely Human Rights Watch and Amnesty International criticized the election, accusing Kagame of political repression and oppression.

In July 2015, Rwandan lawmakers passed a referendum that would allow the constitution to be amended to accommodate Paul Kagame’s bid for a third term.  The speaker of the parliament claimed that “it is only legitimate that we look into the demands of the people,” after reports that 3.4 million Rwandans petitioned the parliament to amend the constitution. With such trends in the central African country, Africa might be witnessing a ‘Mugabe-like’ ‘pseudo’ democracy in the making.

Joseph Kabila, son of Former President Laurent-Desire Kabila, was voted into office soon after the assassination of his Father in 2001. Joseph was democratically elected as President in 2006 amidst many irregularities. He also contested for a second-term in 2011, winning a tight race. His opposition termed the election “illegitimate” and also made known his intention to “swear in myself” as President. Other groups, especially Christian groups, termed the election as “full of “treachery, lies and terror”. Following plans by Kabila’s government to extend his leadership to a third term in January this year, there were widespread protests and riots across the country, which claimed many lives. These protests looked similar to the revolution that ousted Burkina Faso’s Blaise Compaore in 2014 and it yielded the similar results too. DRC’s senate finally yielded to pressure, cancelling plans for a national census that would have warranted a postponement of the 2016 general elections in the country.

Perhaps the most controversial on the list, Pierre Nkurunziza was first elected president in 2005 by the nation’s parliament. He ran unopposed in 2005 and also in 2010 when he was re-elected, an election he won due to a boycott by the opposition.

In 2015, he announced his bid to run for a third term amidst threats of boycotting and assassination. His antagonists argued that his third time bid was not constitutional. In reaction, his supporters claimed his first term did not count because he was elected by the parliament and not the people. There were protests all around the country against this decision eventually leading to a coup. He eventually won despite the coup and election boycott from opposition members. Nkurunziza has notable said that ‘he was chosen by God’ to lead Burundi.