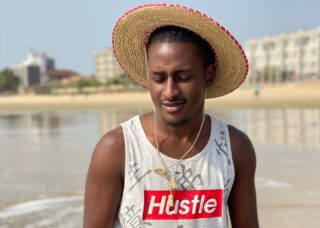 “There are lots of opportunities in Africa. You don’t have to be a genius. You just need to explore and start doing what you can with what you have.” – Alhaji Siraj Bah

The 14th of August, 2017, is memorable for many Sierra Leoneans, but not for good. Three days of downpour caused reddish-brown sludge to stream down the residential slopes of Sugarloaf Mountain in Freetown, the nation’s capital. Sinkholes opened. Residents reported hearing a crack — like thunder or a bomb. And then, the earth collapsed. Many people lost their loved ones to that deadly mudslide in the tropical city. No one knows for sure how many people died in that mudslide. But a World Bank report released a month after the event identified 1,141 dead or missing, making it the worst natural disaster in Sierra Leone’s history. Survivors’ lives took a different turn, most for the worse. However, for 22-year-old Alhaji Siraj Bah, that disaster marked a new beginning.

Alhaji Siraj Bah’s life (yes, Alhaji is his first name) did not start in the Sierra Leone capital. He was born in the Colonial District, 400km away from Freetown. He grew up idolizing inventors like Mark Zuckerberg, and at ten, he dreamt of joining that league. However, two years later, his father, a driver, died. “There was no money to care for my sister and me,” Alhaji said. “So at 12, I left home and hitched a ride to Freetown.”

The goal was to make enough money in Freetown to take care of his family back home. But that didn’t happen for a while. Alhaji spent the next four years living on the streets of Freetown, living off earnings from odd jobs he could find. By the fourth year, he got a job as a labourer in a water factory, earning $1 daily. Then he moved in with a friend’s family, where he lived for six months.

But the morning after the mudslide, Alhaji returned to see that his entire neighbourhood was gone. “The only thing that saved me was I was working the night shift at the factory,” he said. He didn’t only lose his adopted family, but he was homeless again. “I had to start sleeping at the factory as I had no home.”

Since the factory had become Alhaji’s home, he no longer worked single shifts. Instead, he worked round the clock. “I was working both morning and night shifts. So my wages became $2 daily,” he said.

However, Alhaji’s desire for innovation was still alive. So he spent a lot of time feeding his curiosity on YouTube with his boss’ computer. He had seen firsthand how a poorly managed environment could cost lives. And he wanted to combat that. Eventually, he reached his first lightbulb moment – to start solving the waste problem in his city. “I researched paper bags and saw that nobody produced them in Freetown. I read about a young entrepreneur in Uganda who started a recycled bag business with $18. I had saved up $20 from my salary. So I went to the market to buy paper, scissors and glue and started making bags.”

Alhaji Siraj Ba returned to the market and started shilling his finished product to them. “I showed a lot of people and even gave out free samples,” he said. I asked if he was ever worried that his business would fail. “I had nothing to lose,” he responded. “You only have something to lose when you’re rich. I was homeless, living on $1 daily. What was there to lose?” Alhaji’s first ‘big sale’ came when a hotel manager reached out to him for 1000 units of his paper bags after seeing his samples. “I was still working at the factory. But I couldn’t make those bags there. So I moved to my friend’s apartment to work. I didn’t have any staff, so I spent about 16 hours daily working on them and completed the job in five days. They paid $100, and my profit was $55.”

That was already close to what he made from working two shifts at the factory for an entire month. “I thought to myself: my guy, I dun hammer (boy, I’m rich!).” Alhaji went back and struck a deal with the supermarket to pay 50 per cent upfront for his next delivery. That way, he no longer had to spend his money to buy his materials. In a short while, he started getting referrals and expanded his business. “In two months, I employed two people and rented a space.”

According to Alhaji, it wasn’t hard convincing people to buy his product. “I had to preach about the adverse effects of plastic bags,” he said. “The paper bags are eco-friendly. They take less than three months to degrade.”

Starting a fire, stopping the flood

However, selling paper bags wasn’t Alhaji’s ultimate business idea. It was only a means to an end. His endless forays on YouTube had once led him to a video of a man in Indonesia who crafted charcoal replacements from coconut shells. Others were doing something similar in Ghana and Kenya; collecting coconut scraps, drying them out in the sun, grinding them down, charring them in steel drums. Alhaji knew it wasn’t only a great business idea but a way to fight the cause of his adopted family’s death — deforestation.

“Most of the trees deforested in Freetown are used to make charcoal. And deforestation is one of the reasons we had that mudslide,” he said.

Alhaji is right. Although researchers didn’t find the exact cause of that mudslide, people pointed to Sugarloaf mountain’s vanishing greenery. A report by Global Forest Watch proves that Sierra Leone lost 30 per cent of its forest cover between 2001 and 2015. Since electricity is often unreliable, many residents use charcoal as cooking fuel. The consequence, however, is that deforestation makes life riskier for people. Not only does it release more carbon dioxide into the atmosphere — it weakens slopes. Without trees, soil on the high ground around the city becomes saturated by downpours, and the land is eroded.

Alhaji had noticed men in his neighbourhood harvesting wood practically every day. Many burned it to produce bags of charcoal. Most people he knew cooked with it. He wanted to change that, and he knew something that could work — briquettes from coconut husks.

But he needed money to start making these briquettes. The machine for churning out briquettes costs about $3,000. It was the paper bag business that funded his first briquette machine.

Breaking through, one shell at a time

Alhaji Siraj Bah’s idea wasn’t an instant success. The first challenge was finding a formula that worked. “It took a lot of trials and errors,” he said. It’s easy to get coconut shells as many coconut juice vendors in the tropical city dispose of them casually. Alhaji gathered them and followed instructions online. For the first three months, the products didn’t work. “Producing good smokeless bio-briquettes is not easy,” Alhaji said. “A little mistake can weaken your finished product. They might smoke or not burn for as long as they’re supposed to. And so I have to be very careful about the carbonization. I need to be cautious about how much smoke goes into the atmosphere. It’s a very technical process.”

The Indonesian man Alhaji first learned from on YouTube said the briquettes would burn twice as long as charcoal, and a study in Ghana backed up the claim. That was Alhaji’s selling point, especially since the briquettes are slightly more expensive than charcoal (80 cents/kg compared to 70 cents/kg of charcoal). “Our briquettes are cheaper when you measure by value,” he said. However, it took another month after getting his formula right to make his first sale. “These people have been using wood charcoal for centuries. You can’t suddenly make them change that.” So Alhaji kept pitching to people, preaching the gospel of saving trees and leaving free samples of his product across the city. Soon his roster of clients grew to include grocery stores around Freetown. Now he had a working business. He built an aluminium cabin to operate on the capital’s outskirts. He named the venture Rugsal Trading — after his mother, Rugiatu, and his late father, Salieu — and applied for grants across Africa and the United States.

His first recognition came in October 2018, when he was the runner-up of the Anzisha prize in South Africa and received $15,000. The United Nations named him a “Young Champion of the Earth” finalist in 2019. He then received an invitation the following year to pitch at a start-up conference at Harvard Business School, where he won a $5,000 prize. He also raised $20,000 from an angel investor, recruited more workers and bought more machines. Rugsal Trading now employs over 40 workers, producing up to 500kg of briquettes daily.

Alhaji has made a name for himself. Rugsal Trading is fast becoming a household name in Sierra Leone. But with more wins comes more work. Demand for his briquettes is growing fast, and he needs to catch up. “We now export our briquettes. There has been a lot of interest from people in different parts of the world. So we’re getting a new machine by July that’ll allow us to produce up to 1 tonne daily.”

Alhaji seeks to expand outside his home country. According to him, over half the continent needs his solution. “750 million Africans don’t have access to clean cooking energy,” he said. “What if I get this right? I can expand to other countries,” he said. As of 2010, 750 million people in Sub-Saharan Africa lacked access to clean cooking energy. But in 2018, that number increased to 890 million. Although he’s not the only one making this product in Africa, there’s plenty of opportunities among his neighbours.

More so, he isn’t restricting himself to coconut shells. With an increasing demand for his product, he fears the abundant coconut shells may one day not be enough. “We’ve started testing other forms of biomass waste – palm kernel shells, rice husks and so on. Because what if one day we run out of coconut shells? Or what if we start having orders larger than the coconut shells we can gather?”

Rugsal Trading has grown from a one-room shack to eight acres of land outside the city. But the young Sierra Leonean isn’t using all that space to build a briquette empire, at least not yet. While working on creating clean cooking stoves, he runs a farm as well. His mother, Rugiatu, spends time there tending the poultry and crops.

Meanwhile, the paper bag business hasn’t slowed down. It’s an active part of Alhaji’s quest to preserve the environment. The bags, made from 70 per cent banana leaves, are an eco-friendly alternative to plastic bags. But now, he is seeking new ways to reduce plastic waste.

“I once attended a conference where they served us water in paper bottles. And because I’ve worked in a pure water factory, I’ve seen how much plastic waste comes from packaging water. Now we’re researching ways to make those eco-friendly bottles over here.”

Alhaji only wanted to create a solution for Freetown. But now he’s aware that there’s plenty he can do for Africa. “There are lots of opportunities in Africa,” he said. “You don’t have to be a genius. You just need to explore and start doing what you can with what you have.”