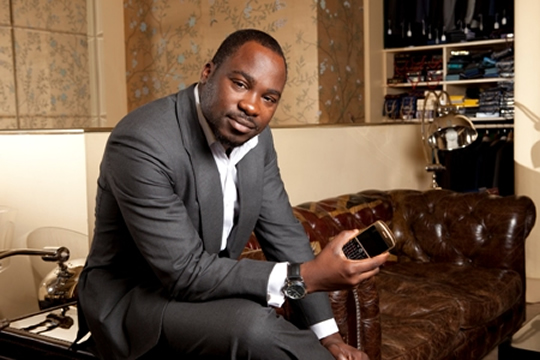 rents. The British/Nigerian entrepreneur got his start in 1999 by parleying his passion for technology and mobile phones into the company R&B Ringtones. His was one of the first companies anywhere in the world to provide urban music lovers with cool ringtones for their mobile phones.

The company started small, with Amosu composing ring tones on his own phone and then selling them for £1 each to his brother’s friends. He created a website to serve the growing number of customers and the website’s popularity mushroomed with revenues for the company reaching over £1 million in the first 18mths and over £6 million after just a few years.

After selling R&B Ringtones for a seven-figure sum, Alexander focussed in on the luxury market. Alexander saw the luxury market as recession proof because wealthy buyers were less affected by general economic conditions. He started by selling products such as diamond encrusted iPhones and solid gold BlackBerrys under the Amosu and Amosu Couture brands.

Alexander put his brand firmly on the map by introducing, what at the time was, the most expensive suit on the planet. Priced at a whopping £70,000, the suit included nine 18 Carat gold and diamond buttons and featured very expensive fabrics.  The publicity generated by the suit helped Alexander gain some foot-hold in the (very) high-end bespoke suits market. Using his own name he created a brand, Alexander Amosu, and began to sell bespoke suits – with prices starting at £3,500.

Alexander has always played up his Nigerian roots while promoting his luxury brands to dispel the myths that Africans can’t produce luxury products, or that Nigerians aren’t trustworthy. Although he started his business empire in the UK he has at every opportunity tried to broaden his business links to Africa. When he was promoting the world’s most expensive suit, he made sure to showcase the suit in Nigeria. His profile in Nigeria was further enhanced when he appeared as an investor on the Nigerian version of Dragon’s Den, a show where would be entrepreneurs pitch ideas to wealthy investors. This was concrete proof of Alexander’s desire to investor in Africa, by putting his money where his mouth is.

Fast forward to today. Alexander has set up, Kamson Luxury Group, an acquisition and holding company to launch luxury international brands into Africa. Recently, Alexander launched the Nigerian version of OK! Magazine into the African market – called OK!Nigeria. OK! Is a popular British lifestyle magazine with more than 50 million readers worldwide. For whatever reason it’s publishers haven’t paid much attention to the African market despite the popularity of celebrity and lifestyle news in Africa. This created an obvious opportunity for the eagle-eyed entrepreneur.

Alexander is an example of Africa’s children coming home to set up businesses using information they’ve absorbed in the western world. Alexander also represents a trend in members of the African diaspora reinvesting in Africa. Recently CNN ran a show about African’s returning to Africa for jobs and opportunities. The future of the continent depends heavily on its diaspora reinvesting in Africa by bringing back knowledge and business ideas. Hopefully Alexander is an example of many others to follow.