A new series from Al Jazeera, Women Make Change, showcases some of the work being done to reduce poverty in Africa while profiling women who have started impactful local projects in countries like Ghana, Kenya, Rwanda, Brazil, Nicaragua, and Papua New Guinea. The series which was launched on Saturday is hosted by former Nigerian media personality of the year Femi Oke.
Contributing to economic growth and redefining their roles on the continent, African women have not been left out of the on-going wave of women empowerment. The inspirational Kenyan women whose work will be featured on the series, have been able to overcome various challenges and build successful businesses in different industries. Not withstanding, it is also very important to support the case for improved female empowerment in the workplace. This presents a new imperative for helping women grow their businesses as it can facilitate the dual outcome of increasing gender equality and promoting overall national economic development.
“At a time when the world is debating gender equality and sustainable development goals, we wanted to hear first-hand from women who are already making significant changes in their communities,” says Ingrid Falck, Al Jazeera English’s head of documentaries. “We interrogated the latest research findings to see how the ripple of impact can work. The combination of impressive, authoritative women who live with these issues in the real world, together with integrated graphics, paints a thought-provoking picture.”
Focusing on areas as diverse as water, agriculture, family planning and sport, their work shows that investing in women is indeed smart economic sense.
The first film, The Water Women, travels to Kenya to talk to Rose Atieno and Catherine Ondele. These women have been instrumental in training local women to build rainwater harvesting tanks to villages which had been without clean water. 43 percent of rural Kenyans are without clean water, essential to combat preventable diseases. Since they built the tank in one village, they have not had a single case of cholera.  It’s also been transformative for a nearby health center, which can now offer a range of new services.

There are currently reduced attacks on women, who no longer have to travel long distances to the communal well. Each woman saves almost six hours a week, which is now time she can spend working or studying. There is also a direct financial benefit to the community, which sells the water to the water company and invests the money in starting new businesses.
Scorecard Rwanda highlights the benefits of sport for Rwandan women, whose families and communities were in desperate need of healing post-genocide.  The women initially faced resistance from the men in their community when Felicite Rwemalika came to enlist them in a local football team, but there have been clear and long-lasting advantages from involving women in team sports.  In addition to the health benefits, sport has given the women a space to meet and talk. For many, they’ve expanded their ideas into new businesses, resulting in farming cooperatives and community restaurants.  The project has also helped girls stay in school and built confidence and aspirations.  “You can be future leaders,” Grace Nyinawumuntu says. “Don’t just think of being a coach like me or Felicite. You can be Minister of Sport and help your country.” 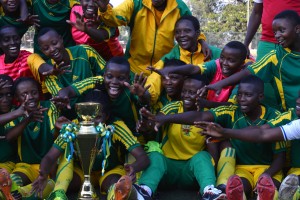 Having access to education is still a challenge for many. Going Places focuses on Zainab Andan and Dolores Dickson, two women in Ghana who are working hard to make sure that girls, in particular, are given the opportunity to go to school.  Zainab benefited from a bursary awarded by an international charity, Camfed. She is now part of an alumni group that works in communities to help girls in her former school. Her community work also takes her to neighboring villages, where she can share her skills by holding financial literacy workshops. Dolores Dickson, director of the charity, oversees training workshops for local projects. One of those which started out small is a Shea butter processing project that now supplies a range of outlets, including The Body Shop. 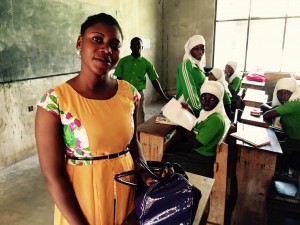