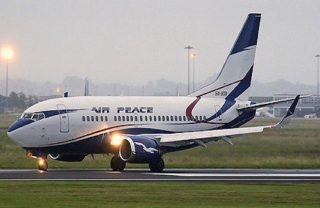 Airpeace expands to Sierra Leone, The Gambia and Senegal

One of Nigeria’s foremost airlines, Air Peace is expanding business by adding three countries, Sierra Leone, The Gambia and Senegal to its flight path. In a statement released on Tuesday, the airline said it’s set to launch trips to Freetown, Banjul, and Dakar on Monday, 19th of February.

The launch which ought to have taken place on the 15th of last month was stalled due to industrial unrest by air traffic control in Dakar, Senegal.  “We are pleased that after the unfortunate suspension of the launch of our Freetown, Banjul and Dakar services fixed for December 15, 2017, due to the industrial action by air traffic control in Dakar, we can confirm that our inaugural flights to the three destinations will now take place on February 19, 2018,” the statement read.

The airline will fly round-trips from the Murtala Muhammed International Airport, Lagos to the new routes four times a week: Mondays, Wednesdays, Fridays and Sundays, at 7 am departure time.

“This is an exciting step in fulfilling our promise to unlock the economies of the region, offer air travellers on business and leisure trips seamless connectivity as well as create jobs for the people,” the statement read further.

Air Peace also plans to launch flight operations to five other regional routes and six international destinations including Dubai, London, Guangzhou-China, Houston, Mumbai and South Africa. According to the statement, the airline, which recently embarked on a project to increase its fleet size to 24 aircraft, will deploy a Boeing 737 aircraft on its Freetown, Banjul and Dakar routes.