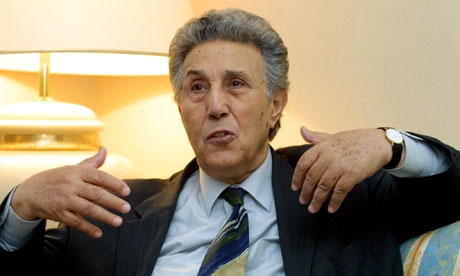 Ahmed Ben Bella, the first president of independent Algeria most remembered for leading the struggle that wrestled the country’s freedom from colonial masters, France, is dead. He died on Wednesday, aged 93, at his family home in Algiers.

The family has refused to name the cause of his death, but the former president was notably admitted at the military hospital in Ain Naadja for discomfort twice in February. Also, the state-run news agency, which announced his death, only said he died “after an illness.”

“Algerians today are weeping for a great man who, with his wisdom and clear-sighted rule, lit up the path to freedom and the building of the modern Algerian state,” current president, Abdelaziz Bouteflika said in a condolence message to Ben Bella’s family.

Born on December 21, 1918, in Maghnia in western Algeria during the peak of French colonial rule, Ben Bella voluntarily enlisted in the French Army in 1936, which Algerian Muslims secretly used to prepare themselves for a freedom fight that was to occur many years after. Deployed to Marseille, France, he played as a centre half for Olympic de Marseille from 1939 to 1940, rebuffing an offer of a professional contract in favour of a full career in the Army.

He was a founding member of Organisation Spéciale, an underground organisation committed to fighting colonial rule. His activity with this group first fetched him an eight-year prison sentence, following his arrest in 1951. But Bella engineered a successful jailbreak from Blida Prison while the term was on, escaping first to Tunisia, and then Egypt.

He was re-arrested under controversial circumstances in 1956 in an interception and redirection of his airplane to France. It was while serving out that prison term that he was elected vice-premier of the Algerian provisional government.

Bella’s popularity soared even higher after Algeria’s Independence; and upon his release in 1962, he was, in September, elected premier in a one-way election that earned the country membership of the United Nations as its 109th member.

Elected president in 1963, he led Algeria’s defence against Moroccan invasion in the Sand war, stabilized the country and implemented a series of popular land reforms that allocated French lands to landless Algerian farmers. By 1964, he was accused of devoting more time to foreign than local affairs.

In 1965, Ben Bella was deposed by Houari Boumédiènne, a close friend of his and the chief of army staff, who placed him under house arrest for another 15 years. Writing many years later on how he was ousted by Boumediene, he said: “I knew what his intentions were and I could have had him stopped 20 times.”

He was granted exile in Switzerland in 1980 by Chadli Bendjedid after the death in 1978 of Boumédiènne but he returned home briefly in the late 1980s to found a party, the Movement for Democracy in Algeria, on which platform he launched a failed shot at the presidency.

He went back into exile in Switzerland for most of the 1990s, during a conflict between government forces and Islamist militants that killed an estimated 200,000 people, returning again years later to lead opposition against the government.

Ben Bella, whose death coincides with the 50th anniversary of Algerian independence, became the head of the African Union’s Group of Elders in 2007. He is most remembered as one of the six “historic leaders” of his country’s revolt against French colonialism, and as a nationalist who served a total of 23 years in French and Algerian prisons.