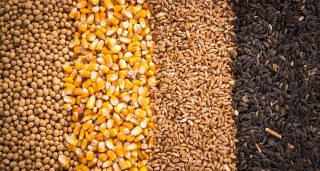 Here’s how the commodity market will fare in 2016

The latest Commodity Markets Outlook report by the World Bank has projected a decline in the price indices of all main commodities. This is partly due to persistently elevated supplies and weak growth prospects in the emerging market economies of the world.

Last year commodity markets were plagued by volatility which subsequently affected commodity-linked companies around the globe. From oil to gold and copper, here is how commodities are expected to fare this year:

Crude oil prices are projected to average $37 per barrel, a decline of 27 percent from last year. By current events, a gradual recovery in oil prices is expected over the course of the year since high-cost oil producers are expected to sustain persistent losses and increasingly implement production cuts that are likely to exceed any additional capacity coming to the market.

However, the global oil price is subject to some risk with a likely larger-than-expected increase in Iran’s exports and a possible recovery of exports from Libya.

Generally, precious metals prices fell 2 percent in the fourth quarter of 2015 as a result of weakening investment demand. Gold and silver prices fell by 2 and 1 percent, respectively, as U.S. dollar appreciation and the start of the U.S. Federal Reserve’s tightening cycle dampened investor sentiment. 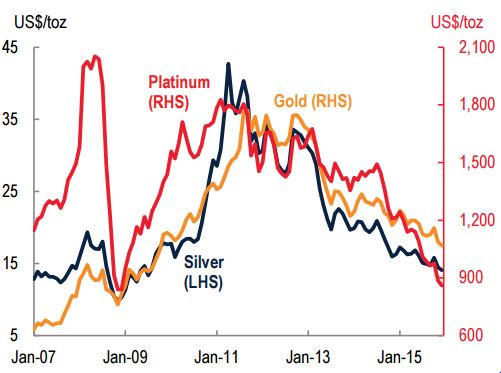 The price of silver is expected to fall the most by 11 percent, since it is more vulnerable to shifts in industrial production the gold is. Gold prices are projected to fall 7 percent, largely driven by the expectations of a rising dollar and a further tightening of U.S. monetary policies.

Iron ore prices are projected to decline by 25 percent, due to reduced imports from China’s steel producers and new capacity in Australia and Brazil. The prices of other metals are also expected to fall, as markets remain well supplied with elevated stocks. Markets are expected to tighten in the medium term due to reduced investment in production capacity, stronger global demand, and some specific factors, including the continued impact of Indonesia’s ore export ban and closure of large zinc mines due to exhaustion.

Grain prices declined 2.5 percent in the fourth quarter of 2015. Wheat prices declined almost 5 percent, followed by rice and maize, which were down about 1.3 percent each.

This year,  the global production of wheat is expected to reach a new record, 1.5 percent higher than last year, with output increases in Australia, China,and Ukraine that more than offset declines in Argentina and Canada.

Global rice production is also expected to decline marginally from 478 to 470 million tons on weakening output prospects in Asia, particularly in India, the Philippines and Thailand, the world’s top rice exporter.