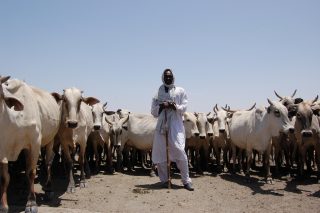 Things are a lot easier for pastoralists in Kenya, thanks to Afriscout, an app that uses satellite images to identify grasslands and wetlands. With the ongoing change in climatic conditions, pastoralists now find themselves travelling long distances in search of grass and water for their herds. These long journeys often cost them time, money, and even their livestock.

Buchu Boru, a herder in Kenya walks tens of kilometres in search of pasture for his animals with no guarantee he will find it. He and other herders often rely on word-of-mouth to determine where to go; they call others in the region or pay a scout to travel and seek pasture.

But sometimes, they are wrongly informed, arriving at no pasture where they were told there was. “Somebody tells you by word of mouth that there is pasture but on arriving you don’t find any,” the 60-year-old told Reuters.

During a drought in 2016, Boru travelled five days with his herd to Ambalo, a place where he had heard there was pasture. But on arrival, there was no pasture. Boru lost 13 cattle in total, some on the way and others in Ambalo.

However, Boru hopes that with Afriscout such issues would become a thing of the past. “We will not be gambling with our livestock. We will be very sure where the pasture and water is and we will just head there,” he said. “It’s better than what we are used to.”

Afriscout is developed by Project Concern International (PCI), a California-based development organization. So far, the app which launched in Boru’s area in February has close to 3000 users in Kenya already, with over a thousand potential increase after further mapping of herding communities in the country.

But the limited availability and use of smartphones by herders pose a challenge to the influx of the app. Not to mention limited mobile phone connectivity in some areas. According to Andrew Mude of the International Livestock Research Institute, only a few herders own smartphones, but that may change if they find the app useful.

“We have seen evidence of pastoralists accessing smartphones when they recognize the value it delivers,” he said.

Mude who helped pioneer the use of satellite imagery to trigger insurance pay-outs for herders when forage is scarce, says the app could be improved by including a broader range of information like data about the market price of livestock. Information about livestock diseases, predators and conflicts can also be contributed to the app by herders.

This year, the rains have brought some respite for the herders and their livestock with full dams and grasslands but they can barely count on such conditions anymore, hence the need for Afriscout. The app is already in use in Tanzania and Ethiopia, with ongoing plans to launch in Niger soon, Brenda Wandera of PCI Kenya told Reuters.