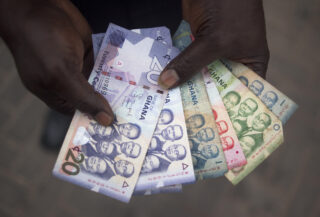 Currency strength is one of the most obvious ways to measure a country’s economic health. And going by that, some African countries aren’t doing so well. While the continent is home to one of the world’s best-performing currencies, it also houses the worst. Several currencies such as the Nigerian naira and Kenyan shilling have fallen to record lows this year.

Recently, Ghana made the news as the country with the worst-performing currency. Some debate that position, such as Steve Hanke, an Economics professor. According to him, the Zimbabwean dollar did a lot worse.

The Ghanaian cedi has depreciated against the USD by 43.98% since Jan 2022, which is why #Ghana takes the 4th place in this week Hanke’s #CurrencyWatchlist. To save the cedi, GHA must install a #CurrencyBoard, NOW. pic.twitter.com/uxSNShZ0Yc

Ghana’s currency, the Cedi, is currently the world’s worst-performing currency. According to the World Bank, the cedi has lost 60 per cent of its value against the dollar this year. Another report by Bloomberg says the currency has declined by 45 per cent. However, both accounts agree that it holds the bottom position.

Ghana’s economy has been under pressure from rising inflation and record-breaking interest rate hikes. Also, the Bank of Ghana’s attempts to control the selling pressure on the cedi has not worked so far.

The South Sudanese pound has declined by 50.8 per cent this year, making it Africa’s second worst-performing currency. South Sudan is scuffling with fast-drying foreign reserves, which is putting pressure on its currency.

The currency’s downtrend became steep after the nation’s central bank announced that it will unify the nation’s exchange rates and allow the currency to float. Also, the country’s reputation of corruption being war-ravaged is keeping foreign investors at arm’s length from it. And seeing people who bet on South Sudan record sizeable losses strengthens their sentiments.

The Sudanese pound is suffering the same fate as its seceded neighbor, ranking third among the continent’s worst-performing currencies. According to the World Bank, Sudan’s currency has declined by 28.6 per cent this year.

After a coup in October last year, Sudan’s economy has been on a downward spiral. The country’s exports plummeted by 85 per cent in January according to central bank data, leading to a heavy selloff of its local currency. And now, the country is battling hyperinflation, forex scarcity, and hiked taxation. Also, the central bank’s decision to relinquish its responsibility of setting forex rates is taking a toll on the country’s currency.

The Malawian Kwacha comes next with a 25.4 per cent year-to-date loss. In May, Malawi announced a 25 per cent devaluation of its currency in response to shrinking foreign reserves. That was the kwacha’s biggest devaluation in a decade. The last one (-33%) happened in 2012. The parallel exchange rate at forex bureaus depreciated by 42 per cent over the same period.

Several factors have contributed to Malawi’s forex shortage. For instance, tobacco export, which provides more than 60 per cent of its foreign exchange earnings, has declined. Two devastating cyclones have plagued the country this year, disrupting its productivity. Malawi’s central bank also credits the rising cost of imports and the war in Ukraine for its depleting foreign reserve.

The CFA Franc has declined by 13.3 per cent this year, ranking as the continent’s fifth-worst-performing currency. Because of its parity with the euro, Francophone Africa’s currency has been losing value against the dollar.

Earlier this year, the euro fell below parity with the dollar for the first time in 20 years, and the CFA Franc followed suit. However, the 14 countries using this currency have no power to effect their own adjustments when the European currency loses value.