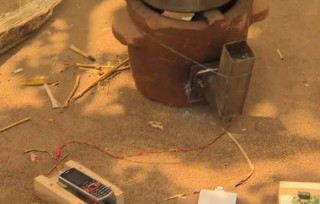 Malawi, a landlocked country which is ranked among the least developed countries of the world, has recently invented an impressive lo-fi solution with mud to charge electrical devices. The device gets attached to a mud oven which allows people to cook and at the same time charge devices like torch lights, radios and importantly their mobile phones.

This innovation is funded by British and Irish aid and has been tested in several parts the country. This has the potential to become a sustainable innovation in solving the energy problem afflicting the country. Currently, only 10 percent of the growing population has access to power.

How the charger is made

The mud is compressed with their feet and then the clay is moulded into the shape of a basic cooking stove. It is then baked with furnace to strengthen it, then a small thermo electronic generator filled with water is connected to the side of the oven. The water in the heated oven transforms the energy from heat to electricity, which is then used to charge mobile devices. The mass appeal of this new innovation  is that it can be used to cook and charge electronic devices like torch and mobile phones at the same time.

There is a possibility that Africans who do not have access to electricity and cannot afford solar panels would opt for this impressive piece of technology.

Here is a video of how the charger is made: