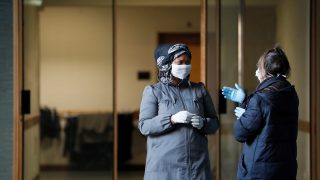 Last week, the Ladima Foundation, in partnership with DW Akademie, announced ten selected films in the African Women in the Time of COVID-19 Short Film Competition. The short film competition invited African women to share their stories about the personal, economic, and social impact of COVID-19 in Africa.

The brave and powerful films that were submitted sadly reflects the very difficult circumstances that many African women face currently. The stories show how the pandemic has indeed impacted women harder and in different ways than their male counterparts.

One of the shortlisted films is Worlds Apart by Yehoda Adukwei Hammond. Hammond is a 19-year-old third-year film directing student at the National Film and Television Institute in Ghana. She is currently interning as a second assistant director with Accra-based film production company, Esse Studios.

Growing up in Accra, Ghana, Hammond has developed a keen interest in social issues happening in her country, particularly girl child education. Her film Worlds Apart tells the story of two junior high school students, Rhema and Erica, whose education has been interrupted by the coronavirus pandemic. The differences in their economic situations directly alter the course of their education and how they live through the pandemic.

In an interview with Ventures Africa, Hammond explains the place of her film in Ghanaian culture and its intended message.

Why this story? What is the intended message of the story?

The message of the film revolves around how the education of children has been interrupted, protective structures disrupted, families and communities have been placed under stress by health and economic burdens. Groups that are already disadvantaged, such as adolescent girls, experience the greatest risks and impacts when their education is interrupted. The film seeks to create awareness on the secondary socioeconomic effects of the outbreak on girl child education.

What is the place of this film within your culture?

In Ghana, the average number of years of education that the poorest girls from rural areas aged 20 to 24 can attain is about four years as compared to 13 years for girls from affluent homes in urban areas. This story was motivated by the lives of the friends I made throughout my education. In the case of Erica, she has male siblings who have the luxury of staying at home while she sells at the market during the closure of schools due to the pandemic. This film is set within the current conditions the pandemic has placed girls of different economic backgrounds in.

How would you describe the main character(s) in your film?

How did the sets, locations and props contribute to the meaning of the film?

Erica’s setting, the market was chosen to depict her livelihood.

Rhema is at the comfort of her home studying at the home office, a serene and calm place with a laptop, tablet and phone at her disposal.

Are there significant symbols and metaphors in the film? What are they?

Each character’s story was edited side by side in comparison. This comparison helped to understand the privilege and the needs of one character over the other. Similarly, the dialogue of Rhema talking about how she learns to make ice cream, smoothies etc was juxtaposed with Erica selling at the market to further compare their lives.

Ironically the background of Erica’s mom’s stall at the market is against a school building adding to the aesthetics and the idea of how she’s supposed to be in school but is currently at the market.

What were the challenges encountered in the production of this film and how did you address them?

My greatest challenge was making Erica’s mother understand how the outbreak had posed a serious threat to her work and that young women and girls are facing severe economic shocks and are more likely to take on high-risk work for their economic survival. We only sought to create awareness and not necessarily degrade her and her daughter in any way.

What are the film’s values — the attitudes toward truth, life, family, and community?

This film seeks to serve as a reflector of a broken society, particularly those affected by the secondary impacts of the outbreak. It reflects the lived realities of girls and other marginalized children throughout the life cycle of education.

Worlds Apart premiered via a live stream on Friday, 10th of July and is currently available for viewing on various platforms including the Ladima Foundation website, MyMoviesAfrica™️, and Premium.Free.