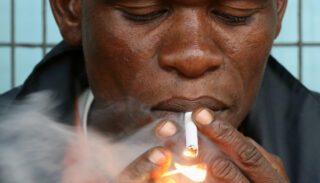 Amidst the concurrent crises of climate change-induced drought, food shortages and armed conflict, the World Health Organisation (WHO) has just revealed some much-needed hope for the African continent. Healthy life expectancy in Africa has shot up by 10 years over the first two decades of the 21st century – the most significant increase in the world. However, public health services have no room for complacency, as this progress is likely to come at the cost of a future rise in non-communicable diseases (NCD) – such as cancer and cardiovascular diseases – linked with ageing populations.

One major threat to these fragile gains is tobacco, a leading preventable cause of death associated with these diseases that kills up to half of the users. While smoking rates have declined globally over the past two decades, tobacco use is on the rise in Africa, with experts already dubbing the continent the “future epicentre of the tobacco epidemic.” The emerging African market has been fueled in part by weak tobacco control regulations and large, young populations influenced by social media.

Standing at a crossroads, governments in Africa must take urgent action to curb this trend and bolster national healthcare systems before many lives are needlessly lost.

Raising excise tax on tobacco products is the single most impactful measure that African governments can implement in their fight against the smoking surge, yet the continent has the most relaxed tobacco tax regimes in the world. Tobacco tax hikes reduce consumption by driving up cigarette prices, which is highly effective at dissuading young people – particularly those in low-income countries – from smoking, as well as in persuading long-time smokers to quit.

A long-running debate over whether tobacco tax increases fuel smuggling from neighbouring countries with lower cigarette prices is partly to blame for the weak regulatory environment in many African countries. However, a growing body of research has found only a limited correlation between taxation and smuggling. Moreover, evidence indicates that this minor effect can be mitigated through robust tax administration and government control measures.

A recent study on Sierra Leone’s anti-tobacco combat perfectly illustrates this finding, concluding that its tobacco prices and tax revenues increased while smoking and smuggling decreased. Kenya is another model for African countries, having successfully raised tobacco taxes while checking illicit trading and boosting tax revenues. These revenues can be invested in enhancing under-resourced national health services, which is vital considering that only seven African countries fund over half of their health budgets.

Yet standing in the way of this vital tax collection is the scourge of tobacco smuggling in Africa. Despite claims linking it to government tax hikes, illicit trading has much more to do with the effectiveness of tax administration and enforcement mechanisms, as well as corruption and rebel group conflict, all of which have historically plagued the continent. South Africa has seen a particularly troubling rise in tobacco smuggling in recent years that has coincided with the weakening of its revenue service, while Botswana has successfully controlled smuggling with enhanced customs and border control measures.

Advanced track and trace mechanisms are another vital enforcement tool for African governments in their efforts to curb illicit tobacco use. One example of such a system that has been effectively rolled out in African countries – including Kenya, Togo and Tanzania – is Swiss firm SICPA’s track and trace solution, SICPATRACE, which has helped these governments tackle smuggling and significantly boost tax collection. Using a unique combination of physical and digital stamping technologies, the single-provider system monitors tobacco products at each step of the supply chain and generates unique identifiers that are virtually impossible for smugglers to forge.

Effective track and trace systems represent an investment with significant returns. While weak solutions leave holes that smugglers can exploit, causing governments to lose out on key benefits, dependable solutions pay for themselves over the long-term when factoring in increased tax revenues and decreased public health spending from lower tobacco consumption.

What’s more, higher tax revenues enabled by track and trace systems can be invested in much-needed mass media campaigns to educate the public on the health dangers associated with smoking, which are particularly crucial as young people across the continent are bombarded daily with misinformation from social media influencers.

Campaigns have already been launched in Africa to counter misleading claims putting a new generation of potential smokers at risk. South Africa’s ProtectOurNext campaign and Uganda’s Tobacco Free Uganda initiative use social media to educate the public on the health dangers of tobacco use and influence tobacco control policy. However, much more investment in educational campaigns across the continent is needed to keep pace with the wave of social media misinformation.

Strong engagement is also needed to help reduce tobacco trade dependency in certain African countries, such as Malawi, where tobacco comprises roughly half of its exports. Lobbyists have successfully convinced many policymakers that tobacco is vital for their economy and consequently that regulation is harmful. To weaken this argument, governments should participate in initiatives such as the UN Tobacco-Free farms project – already deployed in Kenya to great effect – which helps farms transition from tobacco to other crops that can support local food security at a time of shortages rather than damage public health.

Tobacco use is a growing problem in Africa, but there is still time for governments to intervene. Using a combination of tools, including tax hikes, robust track and trace mechanisms and public education campaigns, governments can curb the troubling rise of smoking on the continent while boosting revenues and investment in beleaguered healthcare systems. With encouraging but fragile life expectancy gains in Africa hanging in the balance, African governments have no time to waste.