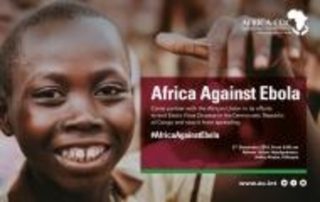 The European Commission announced a €50 million pledge at the Africa against Ebola Private Sector and Partner Forum organized by the African Union (AU) on Monday, to join in the fight against Ebola in the Democratic Republic of Congo (DRC) and its environs.

“The Ebola epidemic in the east of DRC, along with the food security crisis, is worsening the humanitarian situation,” said Jutta Urpilainen, EU’s Commissioner for International Partnerships. The EU seeks to support the DRC population, with the hopes that the “new €50 million support will increase access to health care, improve the nutrition status of families, especially children, and access to clean water.”

The EU Ambassador to the African Union, Ranieri Sabatucci, announced the breakdown of the €50 million donation fund during the forum at the African Union Headquarters in Ethiopia. He said that the majority of the funding, €40 million will provide access to free and quality health care, including for malnutrition, for those living in Ebola-affected areas. Whereas the remaining €10 million, will help tackle the food security crisis in DRC which is currently the second most serious of its kind in the world.

Speaking at a press conference after the forum, Amira Elfadil, the AU Commissioner for Social Affairs, said that the event was successful and different participants have pledged to provide DRC with financial and in-kind support.

Elfadil revealed that the total amount of financial pledges “is $55 million and the largest contributor is the European Union.” He went on to disclose that AU member states will also support in-kind medical products, vaccines, and human resources, which includes epidemiologists.

DRC is witnessing the second largest world Ebola Virus Disease (EVD) outbreak, which started about a year ago. UNICEF reports that The EVD has killed over 2,181 individuals with not less than 3,264 recorded cases. Out of the total confirmed and probable cases, 56 percent (1,838) were female and 28 percent (926) were children aged less than 18 years.

The African Union through the Africa against Ebola Private Sector and Partner Forum, therefore, seeks to raise funds for the mobilization of African health workers in different disciplines such as doctors, nurses, epidemiologist and infection prevention experts amongst others who will join in the fight against Ebola in DRC and other African countries.

These funds will also go a long way in strengthening local health systems and response measures in tackling the Ebola epidemic in DRC. For more details on other contributions, see full list.