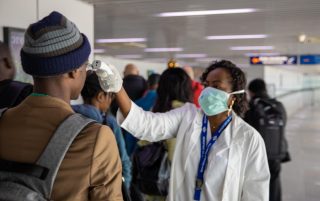 Economic disruption caused by the coronavirus pandemic has so far cost African economies $29 billion, the United Nations has said, warning that the loss could rise in the coming months as more countries in the region report confirmed cases of the virus.

Uganda was the latest to record a novel case of the COVID-19, which although broke out late in Africa compared to other continents, has now spread to more than 40 countries in the region, killing over 30. Globally, almost 350,000 people have been infected, resulting in more than 15,000 deaths as of Monday afternoon, per worldometers.

Over the past two weeks, African countries have intensified lockdowns in reaction to the increasing number of infections. Major economies Egypt, Algeria, South Africa, and Morocco are the hardest hit so far, accounting for more than 50 percent of the coronavirus cases in Africa. The border closures and suspension of flights to and fro have, in turn, affected entire industries, particularly aviation, tourism, agricultural and oil exports.

Oil producers, Nigeria and Angola are projected to lose billions of dollars in export revenue as demand for fuel takes a hit, coupled with the oil price war between Saudi Arabia and Russia. The agency estimates COVID-19 could lead to Africa’s export revenues from fuels falling at around $101 billion in 2020 while the region has also seen a decline in foreign investment inflows, capital flights and instability in financial markets.

As the virus disrupts businesses on the continent and across the globe, the UN Economic Commission for Africa expects that the pandemic will slash some 1.4 percent from Africa’s $2.1 trillion gross domestic product, it said in its latest report. More so, the continent’s annual economic growth will likely drop from 3.2 percent in February to 1.8 percent in March, it adds.

“Africa may lose half of its gross domestic product with growth falling due to a number of reasons which include the disruption of global supply chains,” said Vera Songwe, UNECA Executive Secretary, at a press conference earlier in March.

The crisis could seriously impede Africa’s already stagnant growth, the UN agency warned, with the continent expected to spend more than $10.6 billion in unanticipated increases in their health budgets to curb the spread of the virus.

Recommending policy options to mitigate the economic impacts and successfully navigate through the pandemic, Africa has to reduce more revenue losses that could lead to unsustainable debt, UNECA said. Achieving this would require that governments review and revise their budgets to reprioritize spending towards mitigating negative impacts of COVID-19 on their economies.