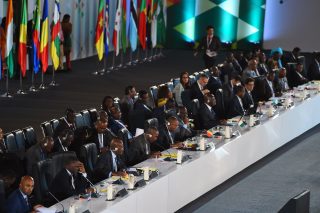 In a Foreign Affairs Council meeting with her African Union (AU) counterpart, Moussa Faki Mahamat, in Brussels, European Union’s (EU) foreign policy chief Federica Mogherini said that the EU is changing its attitude towards Africa, from the aid handout mode to one of a mutual partnership.

“We are moving from the traditional, purely aid centred approach to Africa, to a real partnership, this is the best way to manage migration, this is also the best way of preventing radicalization and facing the challenges, but also getting the opportunities that the African continent offers to its young population,” the EU chief said.

The aim of the renewed partnership is to create the right environment for young citizens through the creation of employment and opportunities within Africa.

Moussa Faki, whilst largely agreeing with Mogherini, said the root causes of migration needed to be addressed rather than their consequences. “…By sending people away, building camps, building barriers, we will never solve these problems,” he said.

It is worthy of note that partnerships between EU and the AU are as old as some of the nations within the continents and since the historic first Africa-EU Summit in Cairo in 2000, partnership agreements were supposedly strengthened through the institutionalisation of dialogue, and even though considerable changes have taken place on both continents, Africa is perhaps still one of the most plagued continents.

In 2010, the third Africa-European Union (EU) Summit that held in November focused on the Joint Africa-EU Strategy (JAES), which was aimed to give a stronger role to the African Union (AU). This was said to be an open opportunity for the EU to renew and simplify its partnership with Africa.

The idea of the summit was to end the EU’s fragmented approach of the African, Caribbean and Pacific (ACP) framework and enhance the Regional Economic Communities (RECs) for development and trade but this didn’t go as planned because reports said that the plan was not enough for a forward-looking cooperation with the AU.

The partnership agreement was to be on the Cancun climate change and the African Peace and Security Architecture (APSA) but the AU insisted on food security and health issues and asked about financial transfers which go a long way to show its limits as a strategic institution.

The 4th EU-Africa Summit in 2014 was poised to focus on collaboration on global challenges, moving beyond a donor-beneficiary relationship and the resolution of long-standing issues such as Economic Partnership Agreements (EPAs) and the International Critical Court (ICC).

The outcome of these partnerships appears to have ended on paper as some form of documentation because the implementation still seems to be lacking in most if not all African countries.

The fifth EU-Africa Summit is scheduled to hold some time this year in Ivory Coast and youth involvement is now the central theme of the preparation and at the same time, creating better opportunities for young people and trying to benefit from the impressive demographic growth of the African continent fits within the holistic approach to migration that the AU Chairperson suggested during the press conference.

However, we need to bear in mind that the AU is still problematic in terms of its international stature and institutional functioning; so the EU cannot be an effective actor with the current large number of fragmented agreements that have governed its relationship with Africa at continental, regional and bilateral levels over the years.

Furthermore, internal politics undermine the potential EU-AU partnership, because African interests and leadership are often directed elsewhere. For instance, Algeria is speaking to South Africa about energy, but outside the AU. Nigeria and South Africa are among the AU’s main contributors but they invest more in their respective sub-regions than in AU integration.

In its 2009 report, Freedom House considered that only 10 African countries were free, and that ‘sub-Saharan Africa presents some of the most disheartening examples of political stagnation, democratic backsliding, and state failure’. Its assessment of Northern Africa was also pessimistic.

Against this background, the EU is not living up to its foreign policy values; it needs to bring democracy to the forefront of its African agenda again, countering AU timidity and the persistent control of autocratic elites.