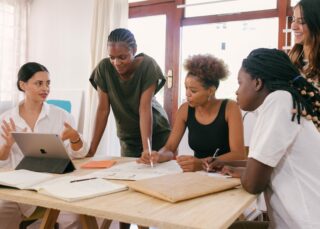 Africa can show the world that women entrepreneurs are our future

By Mazamesso Assih, Minister for Financial Inclusion and the Informal Sector, Government of Togo

I am always proud to say that I live in the most dynamic region in the world, thanks to our young and resourceful population. According to a 2019 World Bank study, Sub-Saharan Africa has the highest rate of entrepreneurship in the world: nearly 42% of the working population, excluding the agricultural sector, are self-employed or employers.
However, the private sector’s contribution to poverty reduction and shared prosperity is hampered because most entrepreneurs struggle to expand their businesses beyond small-scale subsistence activities.
And this is particularly true for women. Women have always played a major role in the economies of sub-Saharan Africa – the only region in the world where they represent the majority of self-employed workers. Collectively, there is more we can do to encourage these risk-takers and to avoid missing out on tremendous opportunities that talented women develop for themselves and us as a society.
Togolese women lead the way in showing how, in business, dedication leads to success. The Government of Togo has long been committed to gender equality because we know it makes the country stronger. We are one of the countries with the most women in government globally. Togo is also the country with the highest rate of women in management positions, according to the International Labour Organisation.
Our tradition of women entrepreneurs is not new: in the 1970s, the famous “Nana Benz” sold wax loincloth on a great scale. This trade is how they became the first female millionaires of Africa. Their ambitious and flashy success marked the beginning of the emancipation of African women. But we have also realised the importance of strongly promoting women’s entrepreneurship through a national strategy with an emphasis on financial inclusion.
How can this be done?
Firstly, financial education: a set of tools that allow everyone to understand how a business is structured and how to make the most of its own potential. Financial literacy underpins economic success, and it is at the core of our financial inclusion programmes.
Secondly, through targeted and concrete measures that help to formalise and grow businesses: micro-credit mechanisms, loans, and grants suited to the needs of women entrepreneurs, whether they are just starting or have experience: nearly ¾ of women business owners in Togo have borrowed money to start their activity, a higher rate than in Nigeria (60%) or South Africa (45%).
In Togo we’ve shown that supporting women entrepreneurs with a range of financially inclusive policies helps to unlock their potential, and benefits the economy at large: today, female-run microenterprises earn more profit than those run by men. And Togo is the only country in the West African Economic and Monetary Union where this is the case.
The women who’ve taken advantage of the financial inclusion policies we’ve implemented have become role models to all the young girls who seek to turn their ideas and creative energy into sustainable income by making the most of the fundamental principle of equal opportunity for all.
This starts a virtuous cycle: women entrepreneurs bring growth by involving other women. Female entrepreneurs are indeed much more likely to employ women than their male counterparts. In fact, about 75% of their workers are women, while that figure drops to 20% in male-owned businesses. Women used to start their own businesses out of necessity on the African continent, now more and more of them are starting their own business out of sheer determination, combining innovation and traditions, as the young “Nanettes” now proudly carrying on the legacy of their “Nana Benz” ancestors.
There are many individual stories to tell: Mrs Kangbeni Yendoupi, who went from being a travelling saleswoman to a large-scale fruit and vegetable seller; Mrs Rose Konde, who became a major player in palm oil farming in the Tabligbo region; or Mrs Laouratou Zibo, who took her hardware and construction equipment business in Blitta to the next level. All these developments were enabled by our National Fund for Financial Inclusion (FNFI) which provided secure loans to these women.
These are just a few examples that I have witnessed, in my country, of the huge power of female entrepreneurship, with the right support from the government. It is to spread these opportunities to all women in Togo that my ministry and the FNFI have guaranteed nearly 1.8 million loans, totalling over 100bn FCFA since 2014. 59% of those funds went to women. A key indication of the success of these schemes is the rate of repayment, which stands at around 94% within the agreed time frame.
My message is not to downgrade the success of men in business. Rather it is to shine a light on a simple fact that, to many, is not obvious: to promote entrepreneurship among women is to promote the growth and development of the entire African continent; it benefits us all.