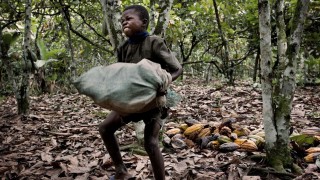 At age 10, Titi was taken from her family in the Republic of Benin, and brought to Nigeria to become a domestic help to a family of six.  Now aged 12, Titi neither knows her surname, nor heritage. The young child works round the clock cooking, cleaning, washing and scrubbing.

In a recent article titled ‘A day in the life of a … house girl,’ Nigerian novelist, Adaobi Tricia Nwaubani tells the story of a twelve year old domestic help named Titi. The story is a detailed example of the typical life of most child domestic workers in Africa, only this time, the subject is in a slightly better environment.

Over a decade after the Child Rights Bill was passed into law, child labour is still prevalent in Nigeria. According to a recent report, there is an increased rate in Child abuse in Kaduna State, Nigeria. Residents of the state complained and called out for the effective implementation of the Child Rights Act (CRA). However, issues of child labour is not exclusive to Kaduna and Nigeria, but sub-Saharan Africa. The International Labour Organization estimates that while Asia and the Pacific has the largest numbers of child population, Sub-Saharan Africa continues to be the region with the highest incidence of child labour – 59 million – over 21%. Titi is one of that 59 million children.

Nwaubani’s story on Titi proves two things. That domestic child labour is indeed substantial, and that ironically, there are certain pull factors to child domestic labour. Child labour is a widespread global phenomenon that traps millions of children in various forms of exploitation involving both sexual and physical abuse, health risks, and violence.

These children, like Titi, toll day and night outside the sight and reach of their families. Quite a number of them, under the legal minimum working age. In Haiti, 10% of child labourers are under 10 years of age. And in Morocco, 70% of children employed by ‘other households’ were under age 12. In Nigerian cities, some of these children are full time hawkers. They market wares from the break of day till late night, exposed to several forms of danger. Others are strictly indoors for house chores and errands.

Titi wakes at 7am or earlier and begins her daily task of sweeping and mopping the floor, ironing clothes, cleaning shoes, and serving food in the morning. She ensures that everyone is fed, then “she sits on a stool in the kitchen to eat her own food before continuing with the rest of the day’s chores.”

Child labour is promoted for different reasons, the major one being poverty. Children are given up by parents who lack the resources to cater for their needs. With the hope and promise of better living conditions and or a monthly income, children are torn from their families to foreign countries or cities. Titi earns 5,000 naira – $23 – a month. But the money is paid to ‘an agent’, who supposedly has an agreement with either Titi’s aunt or mother.

Despite all the work, Titi doesn’t want to leave her new family, because they are ‘kind’ to her, and send her to school. An opportunity she might never have had were she home with her family. This is one of the pull factors of Child labour. Another is the perception of domestic service as a preparation for marriage for the girl child.

The hazards linked to Child labour far outweighs the benefits – which are long term. Some of the possible solutions that will put an end to child domestic labour, is poverty eradication, free education, and strict implementation of the labour laws. This will at least reduce, if not end child domestic labour.