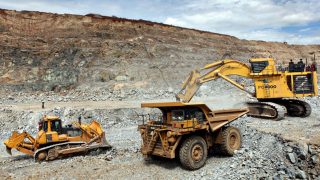 Acacia Mining has said that wastewater pollution which leaked from its North Mara gold mine in Tanzania has been stopped. Contaminated water from a storage dam at the mine was spilling into a stream in the country, sparking a threat of closure from the government.

The African miner, fined over the incident in January, said the spillage happened after sections of a pipeline used to carry wastewater from the mine to a storage facility had either been vandalized or stolen, causing water levels in the pond to rise and overspill.

“Following the mine’s remedial actions, the temporary overspill from the pond has been stopped,” it said in a statement.

The group added that it is working closely with the authorities to ensure this doesn’t happen again.

Fix it or get shut down!

Acacia made the disclosure after Tanzania’s mining minister, Doto Biteko had earlier threatened to shut down the facility without notice if the company failed to halt wastewater pollution at the mine.

Toxic water from waste rock at North Mara’s tailings storage facility was being discharged into the environment, the minister noted after an inspection of the mine.

Biteko who was appointed in January with orders to be strict on managing Tanzania’s mineral wealth said Acacia must stop contaminated water seeping from a waste storage dam at the mine to nearby communities in the country’s north.

“The life of even one Tanzanian is worth more than their gold mining activities,” he said to the news agency, issuing a March 30 ultimatum.

North Mara is Acacia’s largest mine. It produced 336,055 ounces of gold last year, or about 65 percent of the company’s total output. The mine has faced long-standing accusations of pollution, which Acacia Mining has previously denied.

In September, Tanzania’s environment watchdog launched a review into historical allegations of pollution at North Mara. President John Magufuli instructed the regulator to carry out the probe, claiming that a previous report that found no evidence of wrongdoing had been compromised.

“It’s good for them that they have already started to take measures to address this issue. But we will visit the mine again on March 30 to make sure that all the environment concerns have been fully resolved, otherwise, we will take stern measures against them,” Biteko added.

Sour relationship between Acacia and Tanzania

Acacia’s troubles in Tanzania are believed to have begun after President John Magufuli swept to power in late 2015, pledging to secure a bigger share of the country’s natural resource wealth and fight corruption.

Already, production at the company’s other two gold-producing mines in Tanzania – Bulyanhulu and Buzwagi – has been hampered by a ban on exports of gold and copper concentrates in 2017 over claims Acacia owes tax on under-reported output.

In the same year, it was handed a $190 billion tax bill – almost four times Tanzania’s gross domestic product and about two centuries worth of revenue for the company – over the same allegations.

Barrick Gold, which owns about 64 percent of Acacia Mining, recently proposed a deal to settle disputes between the Tanzania miner and the country’s government, which includes a $300 million payment to resolve tax claims and the creation of a Tanzanian firm to manage Acacia’s assets and a 50-50 split of economic benefits.

Acacia Mining is a gold mining business operating in Tanzania, with exploration properties in Kenya, Burkina Faso and Mali.