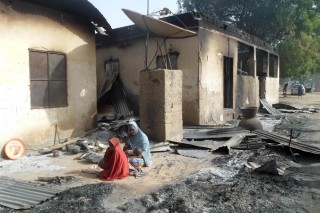 In order to evade easy detection, members of the Boko Haram Islamic sect now disguise as vigilantes or hunters. The Nigerian army disclosed this after a siege of the remaining camps occupied by suspected Boko Haram terrorists in Sambisa Forest.

“The terrorists, after being smoked out of Sambisa forest, in their desperation to wreak havoc on innocent Nigerians and to remain relevant, devised a new tactic of dressing like vigilantes or hunters to deceive unsuspecting members of the public of their true identity,” said Brig-General Rabe Abubakar in a statement.

He also suggested that the group may have disguised themselves during a recent attack in Kuda-Kaya village in Yola, Adamawa state. “The case of Kuda-Kaya village in Madadali community of Adamawa State where a group of Boko Haram terrorists, dressed like vigilantes, opened fire on celebrants during a ceremony readily comes to mind.”

It is therefore of utmost importance that people are mindful of any unsubscribed services or presence of vigilantes or hunters in their neighbourhood. “Members of the public are also advised to be security conscious, at all times, and report promptly to security agencies any suspicious persons or group of persons in their community or raise alarm, where and when necessary,” said Brig-General Abubakar.

A funeral which held nearly two weeks ago in Kuda-Kaya village in Yola, Adamawa State turned even grimmer, as 24 people were declared dead after a Boko Haram attack on the village. After an initial body count, 18 women were reported dead with several others wounded by the Boko Haram militants on a rampage, later on, six other bodies were discovered in the bushes. Those wounded in the attack were rushed to the Gulak Cottage Hospital for immediate medical attention. Women and children are reported to be the most affected by the attack.

In addition to the massacre, the militant group continued terrorising the village and its locals by setting fire to houses while randomly firing their weapons. According to eyewitness reports, three hours passed before an initial body count could be conducted, and some of the women attending the funeral, along with other wounded villagers are still missing.

Although the Kuda-Kaya area has not witnessed such a sudden attack in a while, this is the second time this year that they have been attacked by the insurgents, the first time was in February. Since yesterday’s attack, villagers have been avoiding the general area. Adamawa State lawmaker, Emmanuel Tsamdu, claims that he had to disperse hunters within the area to ascertain the extent of the damage done in the area and the actual number of people killed.

The incident was also confirmed by the representatives from the Public Relations Officer of the Adamawa State Police Command and the Madagali/Michika Federal Constituency. However, both authorities are yet to confirm the number of casualties of the attack.

Boko Haram attacks in the northeastern state continue despite the Federal Government recording victories against the terror group. On the 6th of June, three women were abducted from the state and farmers in the Madagali/Michika community –a border community between Adamawa and Borno states are frequently attacked. The residents of the community remain in a state of perpetual fear.