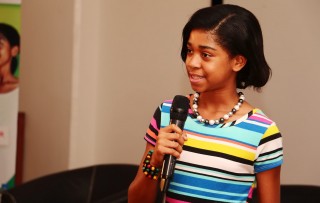 What were you up to as a kid, or young teenager? What were your concerns? Did you think of solving real life problems around you, or were you mostly concerned about fun, food, and television? Or maybe, you were part of the pupils who stayed top of the class, but nothing extraordinary.

When Jomiloju Tunde-Oladipo sat for the Microsoft certified professional exam in 2013, he was both nervous and optimistic. He was nervous because he had failed the exam the previous year, yet optimistic because he was better prepared for the current examination. In the end, his hard work paid off, he scored 769 points, emerging as one of the world’s youngest 2013 certified Microsoft Office specialists for Office Word 2010.

At the time of this achievement, Jomiloju was a nine year old primary 5 pupil of Role Model School, Lagos Nigeria. But his exam score card showed the kid was proficient in a number of subjects, including content formatting, page layout application, document sharing and maintenance.

The youngster credits his success to his parents and hard work. “It was not all that easy, because I had attempted the examination last year, I did not make it then. But I remained focused and I put in a lot of hard work,” he told a publication. “My mum and dad were very supportive. They always tell me never to give up and eventually it paid off”.

As part of his preparation, Jomiloju received ICT training from United Global Resources Ltd, an accredited ICT training firm in Lagos, Nigeria. He says he is always fascinated by the working process of the computer. And that he may likely pursue a career in software.

Winifred Selby is the young Ghanian who co-founded Ghana Bamboo Bikes Initiatives at the age of 15. Her drive was her concern for the welfare of others, plus the need she felt to prove a point. According to her, Africans have a complex, “Africans always seem to think they cannot do something extraordinary; that only people from foreign countries can,” she said.

Selby realised that Ghanaians faced a number of challenges, especially transportation challenges, (farmers and students) and unemployment. So she decided to meet the growing demand for an affordable means of mobility, and also create job opportunities for people. After much thought, and with the assistance of two other students – Kwame Kyei and Bernice Dapaah, Selby founded the award winning company that makes bicycles out of bamboo.

Her company first gained international recognition when in November 2013, UN Secretary, General Ban Ki Moon rode one of Selby’s bikes at the Warsaw Climate Change Conference. Currently, her company  has a large export market and employs a good number of staffs, producing about a 100 bicycles in a month.

Selby, now 20, has succeeded in addressing both employment and transportation challenges in her country. Last year, she was recognized as a 2014 Set Africa Fellow, and WEF Global Shaper.

Anesi and Osine Ikhianosime are not your average teenagers. At ages nine and seven, the Nigerian brothers decided to start a company of their own. At age 12 and 14, both brothers learnt to code. “I learnt to code by myself. I started in 2013, I used sites like Code Academy, Code Avengers and books like Android for Game Development and Games for Dummies,” Anesi told an online media.

According to their mother, Mrs. Ngozi Ikhianosime, Oseni could use a PC at the young age of three. She also mentioned that their school played key roles in encouraging their love for coding; they always had access to computers both in school and at home.

Crocodile Browser Lite is currently available on Google Play Store, and so far, has over 2000 downloads with great reviews from users.

11 year old Nigerian American, Zuriel Oduwale’s career in journalism and documentary-making, began at age nine after entering a competition in the United States. The competition asked applicants to produce a documentary titled “Revolution, Reaction and Reform in History”. From then on, Zuriel knew that she wanted to use the media as a platform to tell Africa’s story in a positive light. “I knew right away what I wanted to do even though I was only nine. It was my opportunity to find a successful revolution and show the world that Africa is not all bad.”

This remarkable young woman started a project to create awareness for the education of the African girl child – DreamUp, SpeakUp, StandUp. Zuriel started this project because, “usually in Africa, the boys always get the resource for education first. I’m a girl child and I don’t like seeing that happen”, she said in an interview.

Her passion for Africa and the African girl child has led her to interview a number of African leaders, and also landed her an interview with Forbes, making her the youngest person to be interviewed by the magazine. “[At the time] I didn’t understand why they wanted to interview me … ” But the magazine explained that though Zuriel’s project on educating the African girl child wasn’t about wealth creation, it was too special to be ignored. And wanted it in their women’s future leader edition.

Zuriel has had the opportunity of meeting with Jamaican Prime Minister, Portia Simpson Miller, former Nigerian president, Goodluck Jonathan, and Ghanaian’s former president, Jerry Rawlings, who happened to be the first African leader she interviewed for the documentary competition.

Kenyan Richard Turere was 12 years old when he put together a system of flashing LED torches to scare lions away from his family’s flock. The young lad was responsible for herding the family flock which were constantly threatened by lions, so he sought ways to put a stop to the attacks. After a few trial and errors, Richard finally discovered a solution – blinking lights. So he got lights, an old car battery, and vehicle blinkers. Then drew electricity from the solar panel and battery circuit that powered their TV. “The lights flash and trick the lions that I’m walking around the cowshed when I’m sleeping in my bed.”

Since his innovation, the family have suffered zero lion attacks. Kenyans who faced similar problems asked him to install ‘The Lion Be Gone’ innovation for them. Now his innovation is used across Kenya to scare predators. This has earned him a scholarship to Kenya’s prestigious Brookhouse School, where he is currently studying Engineering.

Africa is evolving daily; no more are we the problem laden continent at the mercy of the world, but a continent of opportunities and innovations created by brilliant minds. As President Obama rightly acknowledged on his recent visit to Kenya, “Africa is on the move”; it is phenomenal that these youngsters  are responsible for this shift. A look at them, is a look at the new Africa.