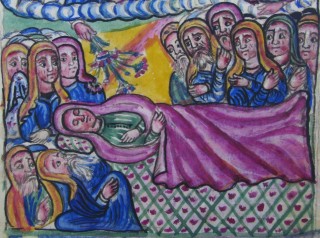 4 fascinating facts about Walatta Petros, subject of the earliest known biography of an African woman

Yesterday, The Guardian shared the story of Walatta Petros, an Ethiopian Saint who is the subject of the ’earliest known book length biography’ of an African woman. The biography was recently translated to English and tells the tale of Petros who lived from 1592 to 1642. Petros’s biography was written in 1672 by her disciples after she passed, and was translated and edited into English by Wendy Laura Belcher an associate professor at Princeton University. Belcher’s translation has been deemed controversial for some of her interpretations but regardless, the biography provides a fascinating look at 17th century life in Ethiopia particularly through an exploration of female autonomy.

Here are a few interesting things we learned from The Guardian about Walatta Petros.

1. Walatta Petros was a noblewoman who left her husband because of her religious conviction.

2. She lead the struggle against the Jesuits’ mission to convert Ethiopian Christians to Roman catholicism, an act, which gained her sainthood.

3. The biography is the “earliest anecdote we know of in which African women express desire for other women” Belcher told the Guardian. Belcher worked with another translator Michael Kleiner, and the two came across curious details revealed in a line which said “a number of community members [were] dying because some nuns had pushed each other around.” After speaking to other scholars, Belcher found an uncensored manuscript, which revealed the actual line, “some young nuns pressing against each other and being lustful with each other, each with a female companion.”

4. Walatta Petros may have been in love with another nun. She had a close relationship with fellow nun Eheta Kristos. The book states, “Walatta Petros and Kristos lived together in mutual love, like soul and body. From that day onward the two did not separate, neither in times of tribulation and persecution, nor in those of tranquillity, but only in death.” While many are upset with Belcher’s interpretation she feels they misunderstand her intentions, “part of this upset is due to not understanding my point. I think she was a sincere, celibate nun, but that she also felt desire for other women and that she was in a life-long celibate partnership with Eheta Kristos” she said to the Guardian.

The full biography is available in English and titled, “The Life and Struggles of Our Mother Walatta Petros.”