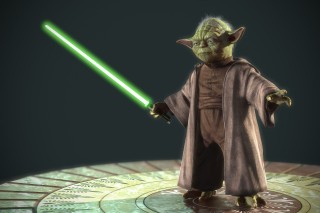 The UK refuses to acknowledge Jediism as a religion. What happened to freedom of worship?

The commissioned defines religion as “a spiritual or non secular belief system, held by a group of adherents, which claims to explain mankind’s place in the universe and relationship with the infinite, and to teach its adherents how they are to live their lives in conformity with the spiritual understanding associated with the belief system. By spiritual or non-secular, [we mean] a belief system which goes beyond that which can be perceived by the senses or ascertained by the application of science. Such a belief system may or may not involve belief in a supreme being, but it does involve a belief that there is more to be understood about mankind’s nature and relationship to the universe than can be gained from the senses or from science.”

Based on the definition, the commission ruled that the order lacks adequate requirements to be regarded a religious organisation having failed to clearly outline its deviation from secularity.

Also, though Jediism claims to have spiritual awareness, in that they believe in The Force as the power that drives the universe, the commission ruled that their existence as a religious organisation has nothing to offer the immediate community in terms of moral or ethical improvement. The order is ruled to be based on the mythology of the star wars film, and also draws from other established religions.

The idea of Jediism was conceived in 2001 when a number of people recorded their religion as “Jedi” on national censuses. The nontheistic movement draws inspiration from the fictional “Jedi” from the Star Wars movie. Star Wars is an American adventure movie that tells the story of characters that are considered “long away from their galaxy.” The fight to defend their order and protect their ruler. The Temple of Jedi Order has an estimated, though unofficial, 30,000 followers in the UK.

While the basis of the judgement of the UK commission on the mythological origin of the force seems quite understandable, the denial of the order the right of religion is not. Apart from the fact that the set of laws which limits the definition of religion to divinity or spirituality looks outdated–last reformed in 2011, the Temple of the Jedi actually has enough elemenst of spirituality to count it for a religion. The order belief in the power of the Force ruling the present sphere of existence and having a reach into the afterlife. The belief of the order is closely related to existing religion like Judaism, Islam and Christianity who all believe in the power of a supernatural being on this world and beyond–the Creed of the Jedi is adopted from the Prayer of St Francis of Assisi. More so, shouldn’t there be freedom of religion?

In the words of Brenna Cavell, 32, a psychologist and spokeswoman for the Temple, The Force could mean anything including God. “It’s not based on worshipping of the force or George Lucas, although many of our members refer to a higher power or the transcendent as the force. But you could easily exchange it for God, the universe … it’s the same thing to us, we just happened to pick that name.”

The fact that the order draws its principle from existing philosophies, like Buddhism and Jainism, which were once philosophies but have gone on to become religions, shows Jediism could as well count for a religion.

While the commission reckons the order has spiritual awareness but faults their sustainability, it’s beyond the commission to predict the sustenability of an organisation like the Temple of Jedi Order. If Scientology could still be in existence after this many years, then the Temple of Jedi Order deserves a chance. More so, they deliver sermons via live broadcast and teach their followers the act of living right. As long as these people constitute no threat to the fundamental human rights of people in their immediate and global community at large, then they are good to go.

Most importantly, the establishment of a charity organisation will go a long way to help a world which is presently at war with itself. While the foundation of the order may be based on the mythological script of the Star Wars movie, the statement contained on the website shows it has gone beyond Star Wars and mythology in that it has taken the idea of The Force from secularity in Star Wars to spirituality in the Temple of Jedi Order. In a world where people worship stones and animals, Jediism deserves a chance to play its part.