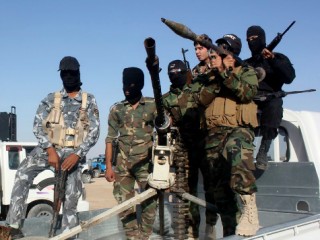 Mogadishu, the capital city of Somalia, was thrown into mourning on Thursday after a bomb went off near a military checkpoint in the capital. The attack, which occurred just hours after one happened earlier in the day at the national theatre, left six people dead, most soldiers, and many civilians wounded.

The earlier incident at the national theatre left only the suicide bomber dead while others sustained various injuries. The bomber reportedly detonated the bomb after he was stopped by the National Somali army. He reportedly drove past them into the building, but luckily for people around, it took the bomb another couple of minutes before it went off, giving people the chance to escape.

The latest bomb is the third in a week after a similar one occurred on Sunday in which at least 20 people were reported killed and over forty injured.

Mogadishu has been a target and subject of terrorist attacks since 2006 when terrorist group Al-Shabab began their operation in the country. The group has claimed responsibility for many of the attacks including the one on Sunday. However, they have not claimed responsibility for the first attack early on Thursday to which the possibility of another terrorist organisation has been raised.

Al-Shabab which is affiliated to to Al Qaeda emerged as the radical youth wing of Somalia’s now-defunct Union of Islamic Courts, which controlled Mogadishu in 2006, before being forced out by Ethiopian forces.

There are numerous reports of foreign jihadists going to Somalia to help al-Shabab, from neighbouring countries, as well as the US and Europe.

The group has orchestrated a number of attacks in Somalia since they got into the country in 2007. They carried out a number of attacks before they were briefly dislodged in august 2011 after attacks from men of the national Somalian army troops, which forced a number of their fighters to surrender. Barely a month later, Al-shabab staged one of the deadliest attacks in recent years after an explosives-laden truck drove into a government building, detonating the explosives that claimed the lives of over 70 people, injuring at least 150 others.

In a reprisal move, the government assembled a coordinated troop on an operation to drive out al-shabab from the country. The troops were able to dislodged the terrorists who had since resorted to soft targets using car bombs.

The group has carried out a number of attacks in recent months to disrupt current parliamentary elections which is scheduled to end later in December. At least three people were reported killed and another four wounded in an attack at a restaurant in October. Earlier in September, a Somali general and his bodyguards were killed after their vehicles were attacked by a suicide bomber. Few hours after the attack, Al-Shabab claimed responsibility for the attack.

On 30 August, at least 20 were killed and 30 injured in a suicide bombing near the presidential palace.  A few days earlier, a car bomb and ensuing gun attack killed ten people at a popular beach restaurant also in Mogadishu. And four days before that, suicide bombers killed more than 20 people in a local government office in Galkayo city located in the semi-autonomous region of Puntland.

In November, a car bomb killed at least 11 people, injuring 16 others when it exploded at a police checkpoint near a busy market in Mogadishu. In 2016 alone, al-shabab has carried out over 12 attacks in Somalia, of which most has happened in Mogadishu. Their purpose have been analysed to be a plan to disrupt the parliamentarian election from which a president will be chosen by the parliamentarians. Al-Shabab has repeatedly expressed their intention to establish sharia as the law of the land, and overthrow the western backed government of the country. Joint military operations of the Somali National Army (SNA) and African Union troops (AMISOM) against Al-Shabab have recovered more than 75 percent of the territories they occupied in 2014. Al-Shabab has been denied its overseas supplies and free movement of foreign fighters, who used to provide the group with training and knowhow for the construction of explosive devices using local sources and products.

As much as the clampdown on the terrorist organisation has been positive, their recent attacks shows they as still as deadly as ever. In recognition of the threat posed by the group, Somali’s outgoing president, Hassan Sheik Mohammud has called on the international community to help the country complete the extermination of the group which commenced in 2011.